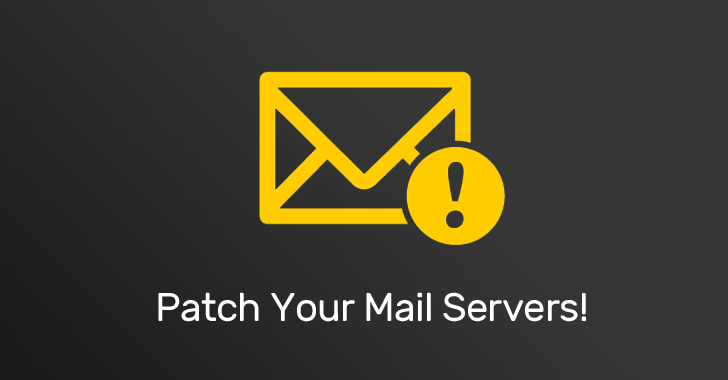 A critical security vulnerability has been discovered and fixed in the popular open-source Exim email server software, which could allow a remote attacker to simply crash or potentially execute malicious code on targeted servers.

Exim maintainers today released an urgent security update—Exim version 4.92.3—after publishing an early warning two days ago, giving system administrators an early head-up on its upcoming security patches that affect all versions of the email server software from 4.92 up to and including then-latest version 4.92.2.

This is the second time in this month when the Exim maintainers have released an urgent security update. Earlier this month, the team patched a critical remote code execution flaw (CVE-2019-15846) in the software that could have allowed remote attackers to gain root-level access to the system.

Identified as CVE-2019-16928 and discovered by Jeremy Harris of Exim Development Team, the vulnerability is a heap-based buffer overflow (memory corruption) issue in string_vformat defined in string.c file of the EHLO Command Handler component.

The security flaw could allow remote attackers to cause a denial of service (DoS) condition or execute arbitrary code on a targeted Exim mail server using a specially crafted line in the EHLO command with the rights of the targeted user.

According to the Exim advisory, a currently known PoC exploit for this vulnerability allows one to only crash the Exim process by sending a long string in the EHLO command, though other commands could also be used to potentially execute arbitrary code.

"The currently known exploit uses an extraordinary long EHLO string to crash the Exim process that is receiving the message," says the Exim developers' team.


"While at this mode of operation, Exim already dropped its privileges, other paths to reach the vulnerable code may exist."


In mid-year, Exim also patched a severe remote command execution vulnerability (CVE-2019-10149) in its email software that was actively exploited in the wild by various groups of hackers to compromise vulnerable servers.

Therefore, server administrators are highly recommended to install the latest Exim 4.92.3 version as soon as possible, since there is no known mitigation to temporarily resolve this issue.

The team also says, "if you can't install the above versions, ask your package maintainer for a version containing the backported fix. On request and depending on our resources, we will support you in backporting the fix."

The security update is available for Linux distributions, including Ubuntu, Arch Linux, FreeBSD, Debian, and Fedora.