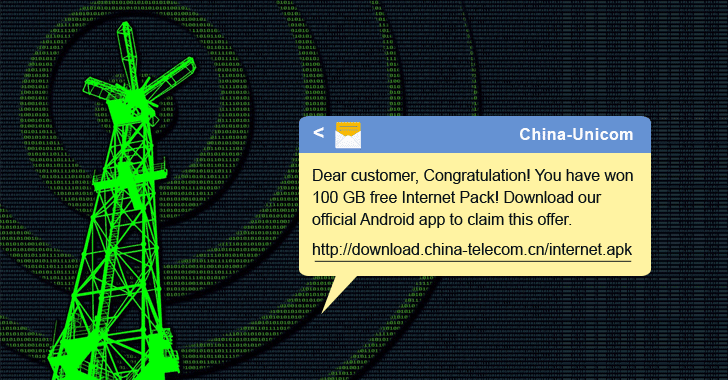 SMiShing — phishing attacks sent via SMS — is a type of attack wherein fraudsters use number spoofing attack to send convincing bogus messages to trick mobile users into downloading a malware app onto their smartphones or lures victims into giving up sensitive information.

Security researchers at Check Point Software Technologies have uncovered that Chinese hackers are using fake base transceiver stations (BTS towers) to distribute "Swearing Trojan," an Android banking malware that once appeared neutralized after its authors were arrested in a police raid.

This is the first ever reported real-world case in which criminals played smart in such a way that they used BTS — a piece of equipment usually installed on cellular telephone towers — to spread malware.

The phishing SMS, which masquerades itself as the one coming from Chinese telecom service providers China Mobile and China Unicom, contains very convincing text with a link to download malicious Android APK.

Since Google Play Store is blocked in China, the SMS easily tricks users into installing the APK from an untrusted source.


"Using a BTS to send fake messages is quite sophisticated, and the SMS content is very deceptive. The message tricks users into clicking a malicious URL which installs malware," the researchers said in the blog post.

Once installed, the Swearing malware distributes itself by sending automated phishing SMSes to a victim's contacts.

However the maximum range of a BTS antenna may be as low as 10-22 miles, the technique is very successful and sophisticated in targeted attacks.

Discovered last year by Tencent Security researchers, the Swearing Trojan has the capability to steal bank credentials and other sensitive information from victim Android devices and to bypass two-factor authentication by replacing a user's legit SMS app with a malicious version that intercepts incoming SMS messages.

What's more interesting? To avoid detection of any malicious activity, the Swearing trojan doesn't connect to any remote command-and-control (C&C) server. Instead, it uses SMS or emails to send stolen data back to the hackers.


"This provides the malware with good cover for its communications and hinders attempts to trace any malicious activity."

While this particular malware campaign has usually targeted Chinese users, Check Point researchers warned in a blog post that the threat could quickly spread worldwide when adopted by Western malware.

The malware scheme seems to be larger than previously thought, as according to researchers, only 21cn.com email addresses were used in the initial malware campaign, while new attacks used other popular Chinese email service providers, such as 163.com, sina.cn, and qq.com, and Alibaba Cloud and other cloud service hosted email accounts as well.

Check Point also points out the nasty HummingBad malware trojan that was also discovered in the Chinese mobile market, and "turned out to be early birds which continued to spread worldwide" if adopted by western malware.