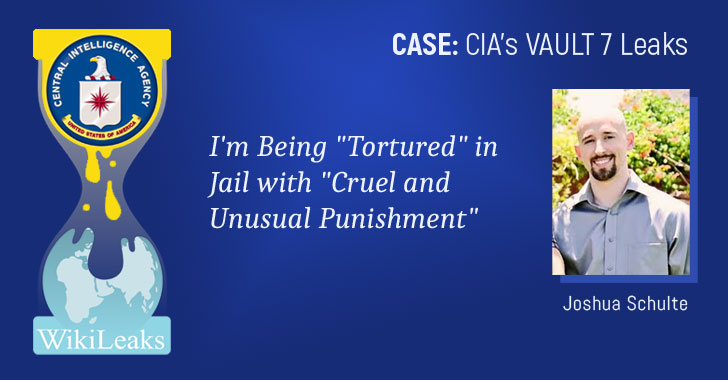 Joshua Adam Schulte, a 30-year-old former CIA computer programmer who was indicted over four months ago for masterminding the largest leak of classified information in the agency's history, has now been issued three new charges.

The news comes just hours after Schulte wrote a letter to the federal judge presiding over his case, accusing officials at Manhattan Metropolitan Correctional Center of interfering with his case pleading and subjecting him to "cruel and unusual punishment" in pre-trial detention.

"The shit-filled showers where you leave dirtier than when you entered; the flooding of the tiers and cages with ice-cold water; the constant blast of cold air as we are exposed to extreme cold without blankets or long-sleeve shirts; the uncontrollable lights that are always on as we are sleep deprived...No human being should ever have to experience this torture," Schulte wrote.

Schulte, who once designed hacking tools and malware for both the CIA and NSA to break into adversaries computers, was arrested in August 2017 and initially charged with possession and transportation of child pornography.

It wasn't until June 2018 that US prosecutors had been able to bring a 13-count superseding indictment against him, alleging theft of over 8,000 classified CIA documents and leaking them to WikiLeaks, who then published the classified information last year under the name "Vault 7."

Now, federal prosecutors have added three new charges against Schulte in a rewritten indictment filed in Manhattan federal court in New York on Wednesday with alleged further attempts to leak information related to his case.

The three new charges against Schulte involved the unlawful transmission and attempted illegal transmission of classified national defense secrets from prison, along with a contempt violation.

According to prosecutors, Schulte had been using one or more smuggled cellphones to communicate covertly with individuals outside the prison.

Prosecutors say after an FBI search into his jail cell found multiple devices, including one encrypted device, with 13 email and social media accounts, the government investigated them which revealed that he had sent classified information to third parties, including via an encrypted email account.

Schulte wrote a handwritten submission to the judge after he was moved to an isolated part of the correctional center on October 1, saying "this entire case is a lie."

"As you peel back lie after lie, nothing remains but a bare search warrant affidavit without probable cause," Schulte said.

Schulte has pleaded not guilty to the previous charges related to child pornography and disclosure of the classified information, and has repeatedly denied any of his involvement in the Vault 7 case.