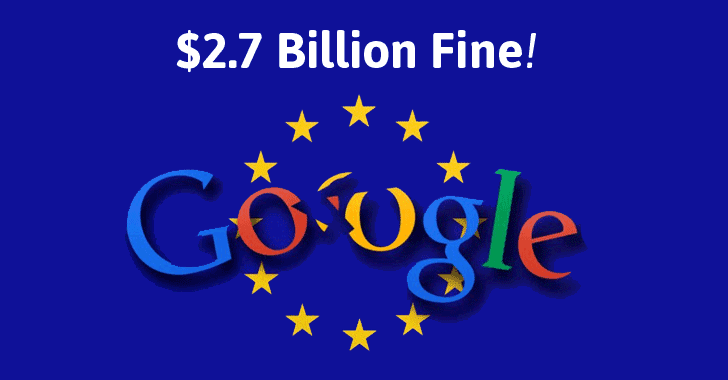 Google has been hit with a record-breaking $2.7 billion (€2.42 billion) fine by the European antitrust officials for unfairly manipulating search results since 2008.

After a lengthy seven-year investigation that was launched in 2010 after several rivals complaint, the European Commission on Tuesday imposed this 'biggest even financial penalty' against the internet tech giant for breaking EU competition law.

by using its search dominance to distort search-engine results to promote own shopping comparison service at the top of all search results.


"Comparison shopping services rely to a large extent on traffic to be competitive." European Commission says in a press release.

The Commission says the amount of penalty has been calculated from Google's income from its comparison shopping service in Europe. Google's total revenue in the year 2016 was almost $90 Billion. Apart from the fine, the Commission has ordered Google to "stop its illegal conduct" and anti-competitive practices within the 3-month deadline or warned to face a further penalty of up to 5% of the average daily worldwide turnover of the Alphabet, Google's parent company."

So now Google will have to change its search ranking algorithm. However, the company can also appeal this decision in in EU courts to delay the resolution for years.


"We respectfully disagree with the conclusions announced today. We will review the Commission's decision in detail as we consider an appeal, and we look forward to continuing to make our case." Google Spokesperson said in a statement.

The previous biggest antitrust fine was against U.S. chipmaker Intel in 2009, which was €1 billion.