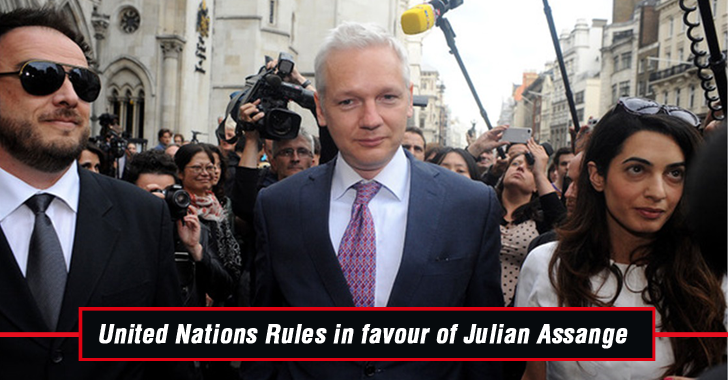 As a result of the legal action against WikiLeaks founder Julian Assange by both British and Swedish Governments, he has been arbitrarily detained by the United Kingdom and Sweden since his arrest in London over five years ago.

However, Assange filed a complaint against both the governments in September 2014 that has been considered by the United Nations Working Group on Arbitrary Detention.

Last week, Assange gave a statement that if the ruling comes against him, then he will surrender himself to Britain.

But, Victory! The decision is in favor of Assange.

The UN group has ruled that the UK and Swedish authorities had illegally detained Assange in violation of their international human rights obligations.

Julian Assange should be released immediately and allowed to leave the embassy as well as both the UK and Sweden should compensate him for his "deprivation of liberty", the UN Working Group on Arbitrary Detention said in a statement released today.

"Having concluded that there was a continuous deprivation of liberty, the Working Group also found that the detention was arbitrary because he was held in isolation during the first stage of detention and because of the lack of diligence by the Swedish Prosecutor in its investigations, which resulted in the lengthy detention of Mr. Assange," reads the UN report.

But, Will UK and Sweden Let Assange Leave the country?

Despite the decision is in favor of Assange, there could be a possibility that both the countries' governments will not let Assange leave the country.

The UN group's ruling is not legally binding in the United Kingdom, so the European Arrest Warrant against Assange remains in place, which means the British government continues to have a legal obligation to extradite Assange.

The UK Foreign Office Secretary Philip Hammond said the UN panel's decision was "ridiculous", and Assange was a "fugitive from justice."

Hammond said the report "changes nothing" and Assange can come out "anytime he chooses" but he will still have to face justice in Sweden.

To make this sure, the Met Police, meanwhile, said it will make "every effort" to arrest Assange should he leave the embassy.

Assange has been living in the Ecuadorian embassy in London for over 3 years, after losing a series of appeals in British courts, to avoid extradition to:

Melinda Taylor, Assange's lawyer, says that if there is a positive ruling for Assange by UN group, Swedish and British government should respect their international obligations and comply with the decision, thereby allowing him to leave freely.

"If WGAD issues a positive determination, Mr. Assange expects the United Kingdom and Sweden to ensure that he can immediately exercise his right to personal liberty, in a manner which is consistent with his right to safety and protection from retaliatory acts associated with his groundbreaking work at WikiLeaks in exposing government violations and abuses," Taylor told Newsweek reporter.

If this is the case, Taylor expects Assange to seek safe passage to Ecuador upon leaving the country's London embassy.

Established in 1991, the UN's Working Group on Arbitrary Detention is made up of 5 legal experts from around the world and has made hundreds of rulings, helping governments to release people.

Similar rulings from the UN panel have resulted in the release of:
Assange was initially arrested in London on 7 December 2010 under a European Arrest Warrant issued by Sweden over rape and sexual molestation charges, however, while on bail in 2012, he claimed asylum in the Ecuadorean embassy in Knightsbridge, where he is currently residing.