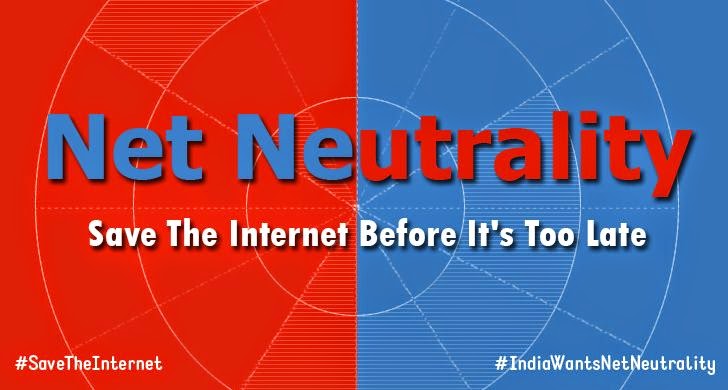 Perhaps you have heard about "Net Neutrality," and the recent controversies over it in India.

But first let's understand What does Net Neutrality mean?

Net Neutrality is simply the Internet Freedom — Free, Fast and Open Internet for all.

Net Neutrality is the principle that Internet service providers (ISPs) should give consumers access to all and every contents and application on an equal basis, treating all Internet traffic equally.

Today, if there's something that makes everyone across the world "Equal" is nothing but the Internet. Equality over the Internet means, the richest man in the world has the same rights to access the Internet as the poorer. And this is what "Net Neutrality" aims at.

But, What if someone snatches this Internet Freedom from you all?

What if you have to pay extra for every single app you want?

This is exactly what the Telecom Regulatory Authority of India (TRAI) is planning to do with Indians.

TRAI is planning to allow telecom operators like Vodafone and Airtel to block applications and websites in order to extort more money from consumers and businesses, which is nothing but an extreme violation of Net Neutrality.

Net Neutrality has been a controversial issue not only in India but worldwide. Recently, the Federal Communications Commission (FCC) approved the strongest Net Neutrality rules in the United States.

Even the European Union is also facing pressure from citizens to enforce strong Net Neutrality.

However, this term is relatively new for citizens in India, but the Government of India wants to decide the fate of both Net Neutrality and citizens in India before the Indians get to know about it.

First, let me clear some of your doubts if the term Net Neutrality is new for you.

Is Net Neutrality a problem right now? No.

Till now, We, Indians have enjoyed the Internet freedom the way it is -- freely and fully. But soon the India's Telcos and telecom regulators will change it all for you...I mean, Against you.

Till now, the telecom operators in India enjoyed making hundreds of thousands of millions in profits over a long run.

The operators have, till now, focused on selling text messages packs and voice call minutes, however behind the scene they have been using VOIP (Voice Over Internet Protocol) to connect with other telecom operators and deliver calls using the Internet.

The cost of traditional voice calls that the operators were charging the consumers were much larger than the tiny fraction of the cost of VOIP.

However, this market is now snatched from these greedy telecom companies -- thanks to WhatsApp, Skype and Google Hangouts. Now, users can easily get the same voice calls delivered at Internet prices by using one of the above services.

And this is what the telcos are scared of…

...and want to charge for the Internet plans in a different manner, based on how you use it.

Soon your telecom operators would charge you extra money for using WhatsApp, Skype or Viber. They could block certain websites they do not like, could provide faster speeds to the highest bidders and slower speeds to other services.

This simply means if, for example, you love to shop from Amazon, but Flipkart pays telecoms operators, then they'll not let Amazon website load on your devices, and you'll end up using Flipkart.

So. What could you do?

...TRAI has prepared and quietly released a consultation paper with 20 questions and wants people to answer them via an e-mail by April 24, in order to hear people's opinion on Net Neutrality.

But, as this news spread across the Nation, it became a topic to debate on social media, news channel, and Internet forums.

A standup comedy group All India Bakchod (AIB) released a video asking people to "Save the Internet". Even the famous Bollywood celebrities, including Shah Rukh Khan, have lent their support to this initiative.

So, it is time to Come up, join this initiative and Save the Internet before it gets too late.