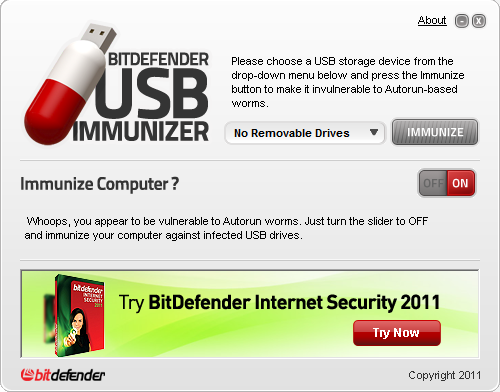 The USB immunizer is BitDefender's response to this growing issue.

Autorun-based malware has been atop of the worldwide e-threat landscape, with notorious representatives such as Trojan.AutorunInf, the Conficker worm (Win32.Worm.Downadup) or Worm.Autorun.VHD. Have to agree on that, many of us get infected buy some silly malware simply by plugin in our friends or neighbours USB , DVD etc…

Introduced back in the Windows XP era to facilitate software installations from CD-ROM media for non-technical computer users, the Autorun feature has rapidly become the infection vector of choice for cyber-criminals.

The Immunize option allows you to immunize your USB storage device or SD card against infections with autorun-based malware. Even if your storage device has been plugged into an infected computer, the piece of malware will be unable to create its autorun.inf file, thus annihilating any chance of auto-launching itself.

The Immunize Computer slider allows you to toggle the autorun feature On or Off for any removable media (except for CD/DVD-ROM devices). If you accidentally plug in an infected USB drive that has not been immunized, the computer will not auto-execute the piece of malware located on the USB storage device.