Windows 10 to Get Built-in Protection Against Most Ransomware Attacks 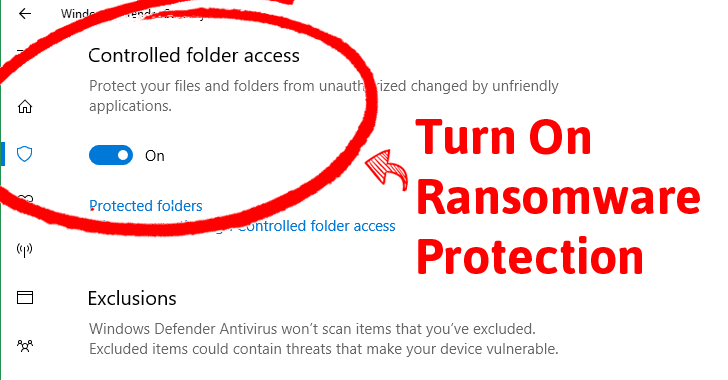 Ransomware Ransomware Everywhere Not a Single Place to Hide!

But, Microsoft has a simple solution to this problem to protect millions of its users against most ransomware attacks.

Most ransomware in the market, including WannaCry and NotPetya, are specifically designed to target computers running Windows operating system, which is why Microsoft has been blamed for not putting proper defensive measures in place to prevent such threats.

In the wake of recent devastating global ransomware outbreaks, Microsoft has finally realized that its Windows operating system is deadly vulnerable to ransomware and other emerging threats that specifically targets its platform.

To tackle this serious issue, the tech giant has introduced a new anti-ransomware feature in its latest Windows 10 Insider Preview Build (16232) yesterday evening, along with several other security features.

Microsoft is planning to introduce these security features in Windows 10 Creator Update (also known as RedStone 3), which is expected to release sometime between September and October 2017.

The anti-ransomware feature, dubbed Controlled Folder Access, is part of Windows Defender that blocks unauthorized applications from making any modifications to your important files located in certain "protected" folders.

Applications on a whitelist can only access Protected folders. So you can add or remove the apps from the list. Certain applications will be whitelisted automatically, though the company doesn't specify which applications.

Once turned on, "Controlled folder access" will watch over files stored inside Protected folders and any attempt to access or modify a protected file by non-whitelisted apps will be blocked by Windows Defender, preventing most ransomware to encrypt your important files.

So, whenever an application tries to make changes to Protected files but is blacklisted by the feature, you will get a notification about the attempt.


Here's how to enable the Controlled folder access feature:


Here's how to allow apps that you trust is being blocked by the Controlled folder access feature to access Protected folders:

Windows library folders like Documents, Pictures, Movies, and Desktop are designated as being compulsorily "protected" by default, which can not be removed.


Users can also enter network shares and mapped drives, but environment variables and wildcards are not supported at this moment.


With the release of Windows 10 Insider Preview Build 16232, Windows Defender Application Guard (WDAG) for Edge — a new system for running Microsoft Edge in a special virtual machine in order to protect the OS from browser-based flaws — also received improvements in usability.

Another new security feature called Exploit Protection has been introduced in Windows 10 16232, which blocks cyber attacks even when security patches are not available for them, which means the feature will be useful particularly in the case of zero-day vulnerabilities.

In the Fall Creators Update for Windows 10, Microsoft has also planned to use a broad range of data from Redmond's cloud services, including Azure, Endpoint, and Office, to create an AI-driven Antivirus (Advanced Threat Protection) that can pick up on malware behavior and protect other PCs running the operating system.

Also, we reported about Microsoft's plan to build its EMET or Enhanced Mitigation Experience Toolkit into the kernel of the upcoming Windows 10 to boost the security of your PC against complex threats such as zero-day vulnerabilities.

Also, the company is planning to remove the SMBv1 (Server Message Block version 1) — a 30-year-old file sharing protocol which came to light last month after the devastating WannaCry outbreak — from the upcoming Windows 10 (1709) Redstone 3 Update.

Besides this, some other changes and improvements have also been introduced with the release, along with patches for several known issues.