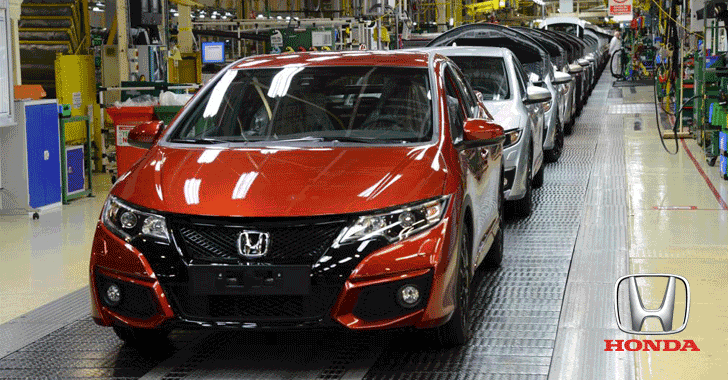 It's been over a month since the WannaCry ransomware caused chaos worldwide and people have started counting its name as 'the things of past,' but…

...WannaCry is not DEAD!

The self-spreading ransomware is still alive and is working absolutely fine.

The latest victims of WannaCry are Honda Motor Company and 55 speed and traffic light cameras in Australia.

The WannaCry ransomware shuts down hospitals, telecom providers, and many businesses worldwide, infecting over 300,000 Windows systems running SMBv1 in more than 150 countries within just 72 hours on 12th of May.

The worm was leveraging an NSA's Windows SMB exploit, dubbed EternalBlue, leaked by the infamous hacking group Shadow Brokers in its April data dump, along with other Windows exploits.


Honda Motor Company released a statement this week, saying the company was forced to halt its production for more than 24 hours at in one of its Japan-based factories after finding the WannaCry infections in its computer networks.

The automaker halted production of more than 1,000 at its Sayama plant, northwest of Tokyo, on Monday 19th June after it discovered that the ransomware had affected networks across Japan, North America, Europe, China, and other regions despite its efforts to secure systems in mid-May, according to a Wednesday report from Reuters.

While Honda did not say how WannaCry got into their networks 37 days after a researcher activated the kill switch, it's clear that the computers inside the Honda network were running unsupported versions of Windows OS or it did not install a highly critical patch released by Microsoft in March.

The Honda's Sayama plant, which produces the Accord sedan, Odyssey Minivan, Step Wagon compact multipurpose vehicle and more, produces around 1,000 vehicles per day.

Renault and Nissan were also infected by the WannaCry ransomware last month, which also forced them to temporarily stop their production at plants in Britain, India, Japan, France, and Romania.


Another recent WannaCry victim was spotted in Australia when the Victoria Police confirmed that the ransomware infected a total of 55 red light cameras and speed cameras in Victoria via private camera operator Redflex.

The malware locked down critical files and demanded a ransom in return (WannaCry usually demands $300 to unlock files), according to the 3AW morning radio show.


"A system patch has been applied, which prevents the spread of the virus," the officials told the show. "The Department is in the process of removing the [WannaCry] virus from the affected cameras. The remaining websites will be rectified in the next couple of days."

The authorities believed the infection was the result of a targeted cyber attack, rather than 'human error,' likely on the part of a camera technician, and that WannaCry got onboard via a USB drive.

Well, it is quite surprising that even after knowing about the WannaCry issue for quite a decent amount of time, big companies have not yet implemented proper security measures to defend against the threat.

Ransomware has become an albatross around everyone's neck. Recently, a South Korean web hosting provider confirmed that the company had paid a record $1 Million ransom to hackers in return of its data following a ransomware attack over the weekend.

In cyberspace, Ignorance is not bliss. So, go and apply the goddamn patches and disable the unsecured, 30-year-old SMBv1 file-sharing protocol on your systems.