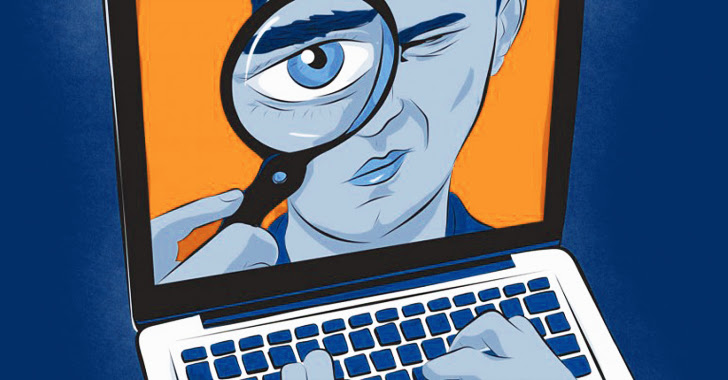 What if your laptop is listening to everything that is being said during your phone calls or other people near your laptop and even recording video of your surrounding without your knowledge?

Sounds really scary! Isn't it? But this scenario is not only possible but is hell easy to accomplish.

A UX design flaw in the Google's Chrome browser could allow malicious websites to record audio or video without alerting the user or giving any visual indication that the user is being spied on.

AOL developer Ran Bar-Zik reported the vulnerability to Google on April 10, 2017, but the tech giant declined to consider this vulnerability a valid security issue, which means that there is no official patch on the way.

How Browsers Works With Camera & Microphone

Before jumping onto vulnerability details, you first need to know that web browser based audio-video communication relies on WebRTC (Web Real-Time Communications) protocol – a collection of communications protocols that is being supported by most modern web browsers to enable real-time communication over peer-to-peer connections without the use of plugins.

However, to protect unauthorised streaming of audio and video without user's permission, the web browser first request users to explicitly allow websites to use WebRTC and access device camera/microphone.

Once granted, the website will have access to your camera and microphone forever until you manually revoke WebRTC permissions.

In order to prevent 'authorised' websites from secretly recording your audio or video stream, web browsers indicate their users when any audio or video is being recorded.


"Activating this API will alert the user that the audio or video from one of the devices is being captured," Bar-Zik wrote on a Medium blog post. "This record indication is the last and the most important line of defense."

In the case of Google Chrome, a red dot icon appears on the tab, alerting users that the audio or video streaming is live.

How Websites Can Secretly Spy On You 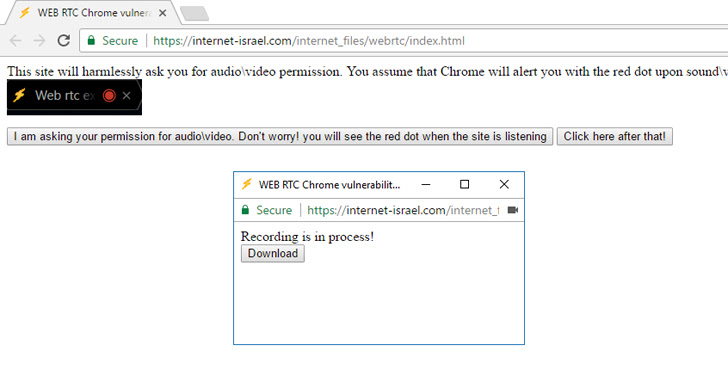 The researcher discovered that if any authorised website pop-ups a headless window using a JavaScript code, it can start recording audio and video secretly, without the red dot icon, giving no indications in the browser that the streaming is happening.


"Open a headless window and activate the MediaRecorder from that window. In Chrome there will be no visual record indication," Bar-Zik said.

This happens because Chrome has not been designed to display a red-dot indication on headless windows, allowing site developers to "exploit small UX manipulation to activate the MediaRecorder API without alerting the users."

Bar-Zik also provided a proof-of-concept (PoC) code for anyone to download, along with a demo website that asks the user for permission to use WebRTC, launches a pop-up, and then records 20 seconds of audio without giving any visual indication.

All you need to do is click on two buttons to allow the website to use WebRTC in the browser. The demo records your audio for 20 seconds and then provides you a download link for the recorded file.


"Real attack will not be very obvious of course. It can use very small pop-under and submit the data anywhere and close it when the user is focusing on it. It can use the camera for millisecond to get your picture," Bar-Zik said. "In Mobile, there is not such visual indication."

The reported flaw affects Google Chrome, but it may affect other web browsers as well.

It's Not A Flaw, Says Google; So No Quick Patch!


Bar-Zik reported the security issue to Google on April 10, 2017, but the company doesn't consider this as a valid security vulnerability. However, it agrees to find ways to "improve the situation" in the future.


"This isn't really a security vulnerability – for example, WebRTC on a mobile device shows no indicator at all in the browser," a Chromium member replied to the researcher's report.

"The dot is a best-first effort that only works on the desktop when we have chrome UI space available. That being said, we are looking at ways to improve this situation."

Google consider this a security vulnerability or not, but the bug is surely a privacy issue, which could be exploited by hackers to potentially launch more sophisticated attacks.

In order to stay on the safer side, simply disable WebRTC which can be done easily if you don't need it. But if you require the feature, allow only trusted websites to use WebRTC and look for any other windows that it may spawn afterward on top of that.

Following such privacy concerns, even Facebook CEO Mark Zuckerberg and former FBI director James Comey admitted that they put tape on their laptops just to be on the safer side.

Although putting a tape over your webcam would not stop hackers or government spying agencies from recording your voice, at least, it would prevent them from watching or capturing your live visual feeds.