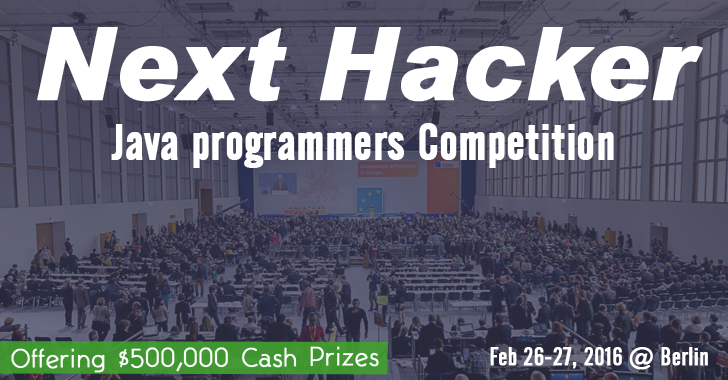 Great news for Hackers and Bug-hunters who enjoy Programming and playing around with Software.

A worldwide group of like-minded computer programmers is hosting The Next Hacker IPPC event on the 26th and 27th of February in Berlin, Germany, where participants can meet hackers and programmers from around the world while getting an opportunity to participate in one of the major hacking-related events in history.

Yes, The Next Hacker is inviting Java programmers to participate in its International Programming Player Competition (IPPC), which is going to be held on the second day of the event, i.e., 27th of February.

The first day of 2016 IPPC event will offer technical sessions on programming, an open panel discussion with renowned hackers and programmers, as well as an opportunity for the world's top programmers to meet leading high-tech companies worldwide.

The Next Hacker is an outstanding programming event with more than 5,000 attendees – no less than 3,000 contestants, including up-and-coming developers and programmers, as well as more than 2,000 guests.

All the guests invited to the event are avid hacking enthusiasts, keeping a close eye on the unique hacking challenges that the contestants will have to face.

The massive number of participants will try to showcase their craft while facing amazingly difficult challenges. This IPPC show is a pleasure to attend and offers the total reward of around $500K in cash prize.

The Challenge – Be Fast, Be Furious

The challenge will start with each programmer having to successfully find and fix holes in three random Java programs.
The fastest programmers will win a share of the cash pool.

The prize money of total $500,000 will be distributed among First 100 programmers.


The Hacker News team will also be there in the event to keep you updated about the Next Hacker International Programming Player Competition.

Your participation in the Next Hacker Programming Contest will allow you to:


So, Sign Up at IPPC now and be a part of one of the Biggest Programming Event.

Roll up your sleeves, Master your skills, Conquer the digital frontier, and Be crowned for the Ultimate Next Hacker.