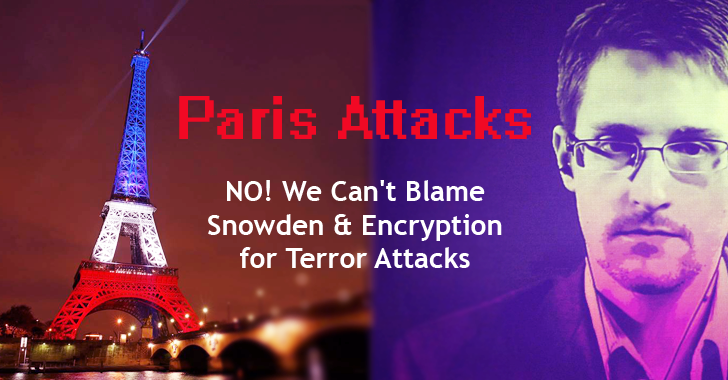 Terrorist groups are increasingly using high-grade, advanced end-to-end encryption technologies so that no law enforcement can catch them.
The deadliest terror attacks in Paris that killed 129 people were the latest example of it.

How did the Terrorists Communicate and Organize the Plot?

Also Read: ISIS Calls Anonymous "IDIOTS" in response to their "Total war" Cyber Threat.
The ISIS mastermind behind the Friday's Paris massacre is identified to be Abdelhamid Abaaoud, who is based in Syria. So to transmit his plans to the suicide bombers and gunmen, he would have made use of secure communication to keep law enforcement out.

FBI's Comey believes ISIS is making use of popular social media platforms to reach out to potential recruits and smartphone messaging applications that are end-to-end encrypted, meaning even the company cannot read the messages.

Ex-CIA Director James Woolsey, who once said Snowden "should be hanged by his neck until he is dead," has blamed NSA whistleblower Edward Snowden for revealing the agency's efforts to break encryption and for teaching terrorists how to avoid being caught.
Also Read: Anonymous declares War on ISIS: We will Hunt you Down!
Woolsey said, Snowden, who leaked a vast trove of classified files detailing the extent and workings of the United States intelligence system, is responsible for the Paris terror attacks and now has 'blood on his hands.'
According to Woolsey, it was Snowden's leak of top-secret documents about how American and British spy agencies monitor and track people worldwide that led terrorist groups like...
...ISIS and Al-Qaeda to adopt new communication methods, including end-to-end encryption channels, to avoid surveillance.

But, Why Blaming Snowden? It's Intelligence Failure

The tougher and more important question here is – If terrorists used encryption to plan the strikes in Paris, did they circumvent our spying agencies' Bulk Interception tools and offensive cyber operations?

"I was a bit surprised just by how quickly and blatantly – how shamelessly – some of them jumped to exploit the emotions prompted by the carnage in France to blame Snowden: doing so literally as the bodies still lay on the streets of Paris," the journalist Glenn Greenwald said, who has worked with Snowden to expose NSA secrets.

Bulk interception is the collection of the vast quantity of internet data, sometimes from thick undersea cables and then storing it in databases for a limited time.

However, the government's claims about the NSA bulk surveillance of email and phone records that the operations are to keep the country safe from terrorism are overblown and even misleading.
Also Read: ISIS Militants linked to Paris Attacks had a Bitcoin Wallet worth $3 Million
Surveillance of phone metadata has had no visible impact on preventing terrorist attacks, so it is a total failure of our intelligence agencies, and not Snowden.
The fact that, long before Snowden's leaks, our so-called intelligence agencies around the world failed to prevent many terrorist attacks, including:
However, after all these terrorist attacks, the government response has been uniform – Give the intelligence agencies more powers and greater abilities to track, surveil and monitor anyone they believe is suspicious.

Moreover, one of the leaked GCHQ documents contains what the agency calls a "Jihadist Handbook" of security measures, which was written in 2003, that instructs terrorists to learn and use sophisticated, strong encryption techniques to avoid government surveillance.
So, how could we blame Snowden, who exposed law enforcement's mass surveillance operations in 2013; almost 10 years after the Jihadist Handbook was written.

After Paris Attack, Government's arguments about Encryption and Backdoor

Now in the wake of the recent Paris terrorist attacks, the US government has renewed their assault on encryption and revived their efforts to force tech companies to install backdoors in their products, like encrypted messaging apps.

Also Read: US Court Rules NSA Phone surveillance Program is illegal.
The intelligence agencies have gotten it all wrong. Due to the bulk collection and interception, the overall volume of encrypted internet traffic has gone up and up, that the intercepted data has become inaccessible even to intelligence agencies.

So, it's not Snowden who is responsible for the Paris attacks, it's the Failure of our government and intelligence agencies.