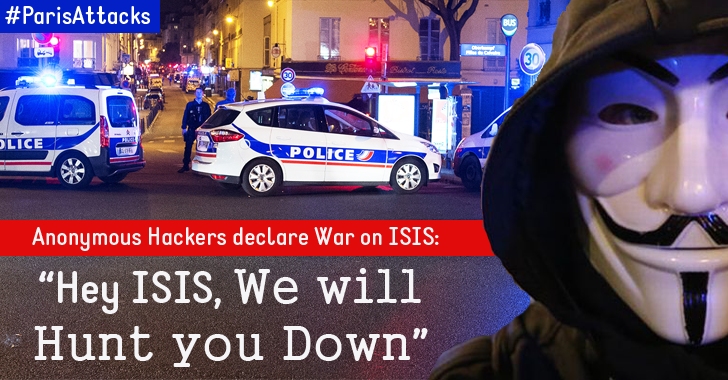 Following the bloody terror attacks in Paris where over 130 people were killed, the hacktivist collective Anonymous has declared total war against the Islamic State (IS, formerly ISIS/ISIL).
Anonymous released a video message, posted in French, on YouTube Sunday announcing the beginning of #OpParis, a coordinated campaign to hunt down ISIS's social media channels and every single supporter of the jihadist group online.

Also Read: NO, We Can't Blame Edward Snowden and Encryption for Terror Attacks.
The combat mission #OpParis was announced as revenge for the recent ISIS terror attacks that took place in Paris on Friday, November 13, 2015.

Anonymous to ISIS: 'We will Hunt you Down!'

Behind its signature Guy Fawkes mask, the group's spokesperson speaking in French said, "Anonymous from all over the world will hunt you down. Expect massive cyber attacks. War is declared. Get prepared."

"You should know that we will find you, and we will not let you go. We will launch the biggest operation ever against you," the Anonymous spokesperson added. "The French people are stronger than you and will come out of this atrocity even stronger."

Under the #OpISIS online campaign, Anonymous members have been defending French cyber-borders following the Charlie Hebdo massacre in January. In #OpISIS, the group hacked, defaced, unmasked, and reported thousands of ISIS Twitter accounts.

Now, expect the same thing to happen again. In a separate tweet, the group posted a video message saying:

"We are upping our game, you will now be hit by major cyber attacks, I will be speaking to all the most prominent #OpIceISIS teams and supporters such as @TheBinarySec, @CtrlSec, @OpIceISIS and we will work together to take down all ISIS cyber communications and your accounts, haha good luck with keeping them."

More interestingly, the group has allegedly leaked a list of almost 1000 ISIS Twitter accounts in #OpParis.
The social network giant Facebook on Friday the 13th deleted an Anonymous group page, which has been exposing and reporting social media accounts linked to pro-ISIS, as well as banned all its administrators, without giving any prior warning.
The company said that the existence of the group was a "violation of Facebook Terms of Service and Community Standards."