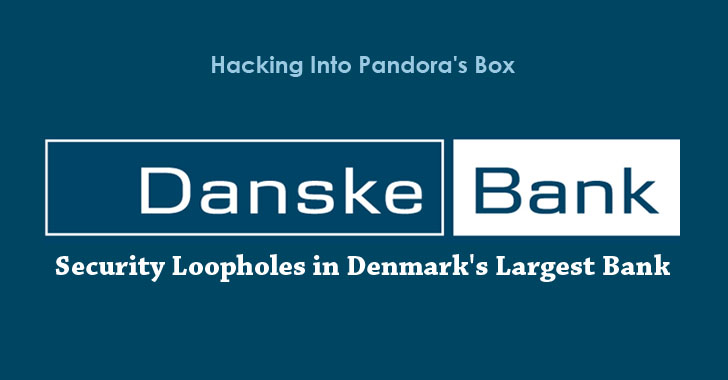 While accessing your Bank account online, Have you ever thought…

...there could be a Hacker, somewhere in the World, who is after your Money?

Maybe NO. Because, you believe that your bank offers Secure banking solution, Right?

At The Hacker News, we have reported many incidents of cyber attacks, which proves that Banks are more often being targeted by Hackers, despite robust Banking Security mechanisms.

Today we are going to talk about security of one of the Denmark's Largest Bank, reviewed by Sijmen Ruwhof, an Ethical Hacker, and IT Security Consultant.

Ruwhof recently published a blog post, "How I could Hack Internet Bank accounts of Danish Largest Bank in a few minutes".

His In-depth technical post explains the extent to which Danske Bank, one of the largest Danish Bank, is vulnerable to hacking.

In August, Ruwhof got intrigued with the idea of testing Bank's security while interacting with a group of Danish hackers at the Chaos Communication Camp (CCC), near Berlin.

According to Ruwhof, Security experts and Whitehat hackers were disappointed with the terrible security implementations adopted by many Danish Banks.

Ruwhof decided to see more of it… and Danske Bank did not disappoint him.

He visited the website and viewed the HTML code of the customer login screen, and while browsing through the code, he had not imagined the kind of shock he got.

....Ruwhof wanted to report about the security vulnerabilities to Danske Bank, in an effort to aware them about the risks associated with their Online Banking service.

What He got in return was Nothing!

Firstly, the Bank didn't has any contact that supports and responds to such disclosures.

Secondly, after managing to get a customer care number, the executive at the other end said: "Our technical guy will look at your finding."

Then finally, Ruwhof took the Social Network's route to reach an employee of Danske Bank, where he got success, and reportedly the vulnerabilities were got patched within 24 hours.

After 12 days Danske Bank acknowledged Rowhof and reading that he almost went into the coma, as the Bank thanked him for reporting about a potential vulnerability!

On a serious note, Ruwhof said that with his 17 years of experience, he can differentiate between the good and the bad.

"Someone at Danske Bank has messed up pretty hard, and they're now covering the situation. That's not honest and certainly not transparent."

"For at least two weeks, but probably a lot longer, very confidential customer data in the form of session cookies were leaking on Danske Bank's web site. With these cookies, it should have been possible to hijack internet banking accounts of their customers. They closed the security hole quickly but are now in denial of it."

Hacker Attack! Could they Steal from you?

We would suggest the Danske Bank and our readers to have a Good Read of the following links to know the extremities at both the ends.


Therefore, you CAN be the victim bank of cyber attack too!