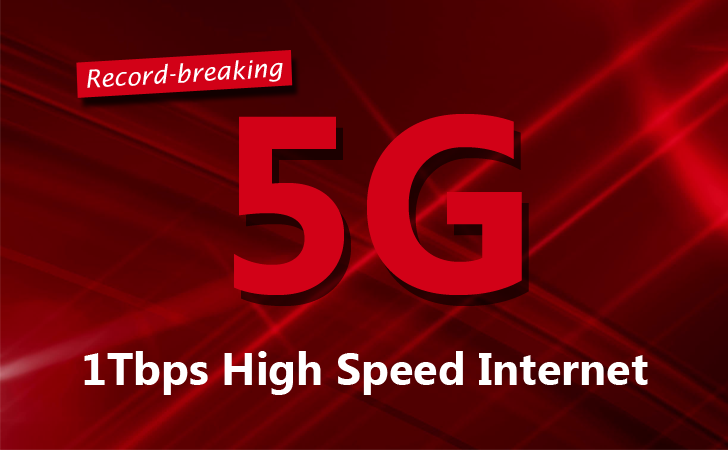 New Generations usually bring new base technologies, more network capacity for more data per user, and high speed Internet service, for which Internet service providers usually advertise. However, it is believed that the fifth generation (5G Technology) of mobile network will be beyond our thoughts.

1TBPS OVER 5G
Security researchers from the University of Surrey have just achieved Record-Breaking data speeds during a recent test of 5G wireless data connections, achieving an incredible One Terabit per second (1Tbps) speed – many thousands of times faster than the existing 4G connections.

After 4G, 5G is the next generation of mobile communication technology that aims at offering far greater capacity and be faster, more energy-efficient and more cost-effective than anything that has seen before. The boffins say 5G will be different – very different.

The 5G test was conducted at the university's 5G Innovation Centre (5GIC), which was founded by a host of telecoms industry partners including Huawei, Fujitsu, Samsung, Vodafone, EE, Aircom, BT, Telefonica, Aeroflex, BBC and Rohde & Schwarz.

"We have developed 10 more breakthrough technologies and one of them means we can exceed 1Tbps wirelessly. This is the same capacity as fiber optics but we are doing it wirelessly," 5GIC director Prof Rahim Tafazolli told the news website V3.

With 1Tbps, it is possible to download a file 100 times the size of a feature film in just three seconds. This incredible speed is over 65,000 times faster than the current 4G download speeds.

5G EXPECTED TO ROLL OUT BY 2020
The test was carried out over a distance of 100 meters using equipment built at the university. The head of the 5GIC said he planned to demonstrate the technology to the public in 2018. It's believed that 5G could possibly be available in the UK by 2020.

UK communications regulator Ofcom has been supportive of efforts to get 5G to the public. Ofcom previously said it expected 5G mobile should be able to deliver speeds between 10 and 50Gbps, compared with the 4G average download speed of 15 Megabits per second (Mbps).

According to Prof Tafazolli, there were hurdles to overcome before 5G would be ready, he said, "An important aspect of 5G is how it will support applications in the future. We don't know what applications will be in use by 2020, or 2030 or 2040 for that matter, but we know they will be highly sensitive to latency."

There is a need to bring "end-to-end latency down to below one millisecond" in order to enable latest technologies and applications which would just not be possible with 4G. Tafazolli mentioned 3D holographic chess games on smartphones, controlling connected cars over 5G and other possible future applications requiring such low latency.

5G – NEW FRONTIER FOR CYBER ATTACKS
5G will, no doubt, provide a high speed Internet connectivity that would be really a great news for all, but that would be a distinction for cyber criminals as well. In Future, by leveraging 5G technology, it would be very easy for hackers and cybercriminals to take down almost any website on the Internet using Distributed Denial of Service (DDoS) attacks.

In Era of expected 50Gbps Internet speed at home or business, there would be no need for cyber criminals to make a critical infrastructure of botnets by compromising hundreds of thousands of devices, rather they only need few devices with 5G Internet connection to launch the ever largest DDoS attack of around 1 Tbps.