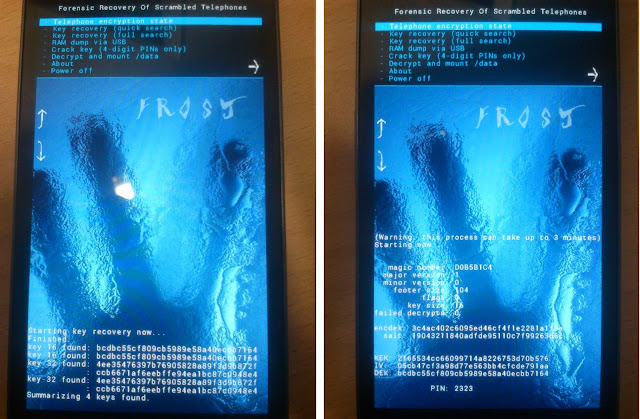 Using a new attack on most popular Android phones platform, a team of researchers in Germany managed to grab stored cryptographic keys if the device is frozen state for an hour.

The method which able to bypasses Google's data scrambling encryption system introduced in Android 4.0 Ice Cream Sandwich to reveal the phone's hidden data, when leaving Android phones in a freezer until they fell below -10 degrees Celsius, which revealed previously scrambled data, including contact lists, browsing histories, and photos.

The team developed software called FROST, Forensic Recovery of Scrambled Telephones, which lets them copy data from the phone for analysis on a computer.

Abstract explains,"We present FROST, a tool set that supports the forensic recovery of scrambled telephones. To this end we perform cold boot attacks against Android smartphones and retrieve disk encryption keys from RAM. We show that cold boot attacks against Android phones are generally possible for the first time, and we perform our attacks practically against Galaxy Nexus devices from Samsung."

"To break disk encryption, the boot loader must be unlocked before the attack because scrambled user partitions are wiped during unlocking. However, we show that cold boot attacks are more generic and allow to retrieve sensitive information, such as contact lists, visited web sites, and photos, directly from RAM, even though the boot loader is locked."

They discovered that quickly connecting and disconnecting the battery of a frozen phone forced the handset into a vulnerable mode. This loophole let them start it up with some custom-built software ie. FROST, rather than its on board Android operating system.

FROST will allow the researchers to copy sensitive data on the handset which can then be analysed on a separate compute later on. You can download FROST here.