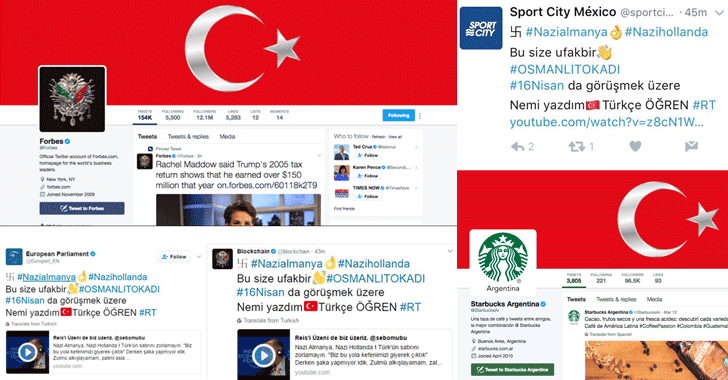 Mar 15, 2017
In a large-scale Twitter hack, thousands of Twitter accounts from media outlets to celebrities, including the European Parliament, Forbes, BlockChain, Amnesty International, UNICEF, Nike Spain and numerous other individuals and organizations, were compromised early Wednesday. The compromised Twitter accounts is pushing a disturbing spam message written in Turkish comparing the Dutch to the Nazis, with Swastikas and a " #NaziHollanda " or " #Nazialmanya " (Nazi Germany) hashtag, and changed some of the victims' profile pictures to an image of the Turkish flag and Ottoman Empire coat of arms. In addition to the message, the hackers are also posting a link to a YouTube video and the Twitter account Sebo . According to the latest reports, this weird Twitter activity on numerous high-profile accounts is the result of a vulnerability in the third-party app called Twitter Counter. Twitter Counter is a social media analytics service that helps Twitter users to
Next Page 