The U.S. Justice Department (DoJ) on Tuesday announced the arrest of a married couple in connection with conspiring to launder cryptocurrency worth $4.5 billion that was siphoned during the hack of the virtual currency exchange Bitfinex in 2016.

Ilya Lichtenstein, 34, and his wife, Heather Morgan, 31, both of New York, are alleged to have "stolen funds through a labyrinth of cryptocurrency transactions," with the law enforcement getting hold of over $3.6 billion in cryptocurrency by following the money trails, resulting in the "largest financial seizure ever."

Prosecutors charged the couple not for the hack itself, but rather for receiving the stolen bitcoin into a digital wallet under their ownership, a part of which was laundered to conceal the activities and the movement of the money. In 2019, Israeli authorities apprehended two brothers, Eli and Assaf Gigi, over their supposed involvement in the 2016 security breach.

"Bitfinex will work with the DoJ and follow appropriate legal processes to establish our rights to a return of the stolen bitcoin," the company said in a statement, adding "We have been cooperating extensively with the DoJ since its investigation began and will continue to do so."

The laundering scheme involved moving proceeds of 119,754 bitcoin (BTC) from Bitfinex by initiating more than 2,000 unauthorized transactions that were diverted to a digital wallet under Lichtenstein's control. Over the past five years, roughly 25,000 stolen bitcoins were then transferred and deposited into financial accounts held by the couple.

"Beginning in or around January 2017, a portion of the stolen BTC moved out of Wallet 1CGA4s in a series of small, complex transactions across multiple accounts and platforms," explained IRS investigator Christopher Janczewski in an affidavit. "This shuffling, which created a voluminous number of transactions, appeared to be designed to conceal the path of the stolen BTC, making it difficult for law enforcement to trace the funds."

To achieve this, the defendants are said to have used a number of sophisticated laundering methods, including —

"Around 21% of the stolen Bitcoins have been moved and laundered over the past five years," blockchain analytics firm Elliptic said in a report, noting the use of AlphaBay as a "mixer" service and the Wasabi Wallet privacy wallet in an attempt to hide the blockchain money pathways.

However the DoJ's seizure and takedown of AlphaBay in July 2017 made it possible for law enforcement to access the service's internal transaction logs, effectively enabling the tracking of the stolen Bitfinex funds through AlphaBay and to a crypto asset exchange account in the name of Lichtenstein. 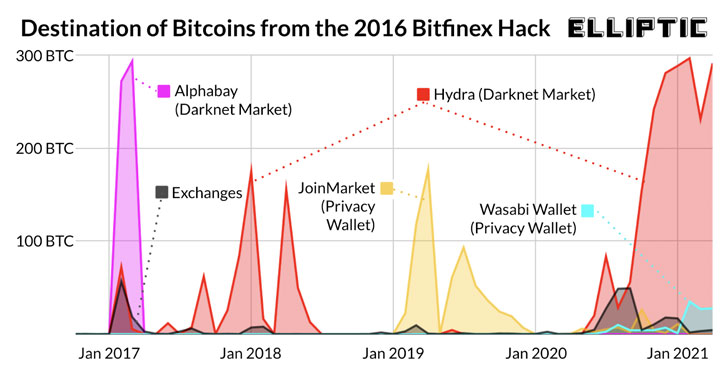 Pursuant to a court-authorized search warrant of online accounts controlled by the two individuals, law enforcement officials ultimately obtained access to a file saved to Lichtenstein's cloud storage account that contained the private keys required to access the digital wallet used to receive the funds, enabling the authorities to recover the remainder of more than 94,000 bitcoins.

"Today, federal law enforcement demonstrates once again that we can follow money through the blockchain, and that we will not allow cryptocurrency to be a safe haven for money laundering or a zone of lawlessness within our financial system," said Assistant Attorney General Kenneth A. Polite Jr. of the Justice Department's Criminal Division. "The arrests today show that we will take a firm stand against those who allegedly try to use virtual currencies for criminal purposes."