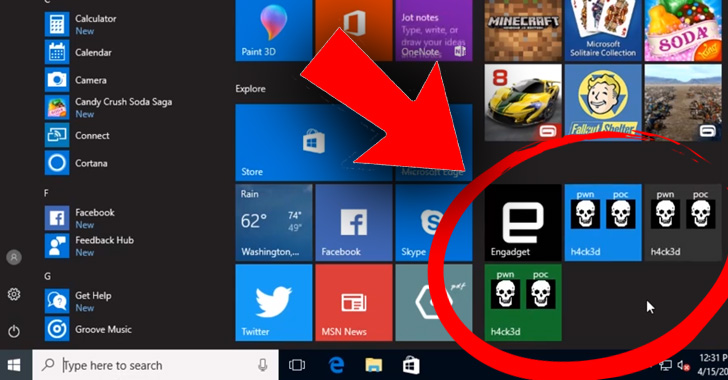 A cybersecurity professional today demonstrated a long-known unpatched weakness in Microsoft's Azure cloud service by exploiting it to take control over Windows Live Tiles, one of the key features Microsoft built into Windows 8 operating system.

Introduced in Windows 8, the Live tiles feature was designed to display content and notifications on the Start screen, allowing users to continuously pull up-to-date information from their favorite apps and websites.

To make it easier for websites to offer their content as Live Tiles, Microsoft had a feature available on a subdomain of a separate domain, i.e., "notifications.buildmypinnedsite.com," that allowed website admins to automatically convert their RSS feeds into a special XML format and use it as a meta tag on their websites.

The service, which Microsoft had already shut down, was hosted on its own Azure Cloud platform with the subdomain configured/linked to an Azure account operated by the company.

However, it turns out that even after disabling the RSS-to-XML converter service, the company forgot to delete nameserver entries, leaving the unclaimed subdomain still pointing to the Azure servers.

Hanno Böck, who discovered this issue, seized this opportunity to exploit the weakness and reclaimed the same subdomain using a newly created account on Azure.

Apparently, the indirect control over Microsoft's subdomain made it possible for him to push arbitrary content or notifications on Windows Live Tiles of various app or websites that are still using meta tags generated by the disabled service.

"With an ordinary Azure account, we were able to register that subdomain and add the corresponding hostname. Thus we were able to control which content is served on that host," Böck said.

"Web pages that contain these meta tags should remove them or if they want to keep the functionality, create the appropriate XML files themselves."


This technique is usually known as "subdomain takeover," an important attack vector that can usually be found in the way most online services allow their users to run web apps or blogs with a custom domain name.

For example, when you create an app on Azure and wants to make it available on the Internet with a custom domain name, the platform asks users to point their domain's nameserver to Azure and then claim it within their account's dashboard, without verifying the domain ownership.

Since Microsoft Azure does not have a mechanism to verify if the account claiming a domain really owns it, any Azure user can claim any unclaimed domain (or left unattended) that have nameservers pointing to the cloud service.

"We have informed about this problem but have not received it yet," Böck said. "Once we cancel the subdomain a bad actor could register it and abuse it for malicious attacks."


Google's Blogger service also had a similar issue, which the company patched a few years ago by making it mandatory for every blog owner to set a separate, unique TXT record for their custom domains in order to verify the claim.

Though it seems Microsoft has now secured its subdomain by removing the nameservers, The Hacker News reached out to Microsoft to learn if the company has any plans to fix the "subdomain takeover" issue in its Azure cloud service platform that could eventually affect other domain users as well.

We will update this report when we hear back.