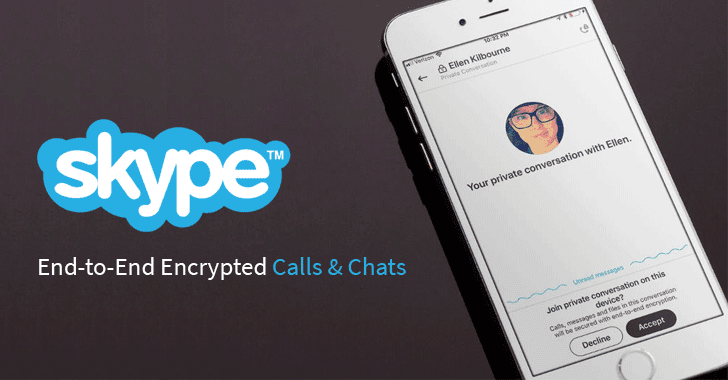 Good news for Skype users who are concerned about their privacy.

End-to-end encryption assured its users that no one, not even the company or server that transmits the data, can decrypt their messages.

Signal Protocol is an open source cryptographic protocol that has become an industry-wide standard—which is used in Facebook Messenger, Whatsapp, and Google Allo for secure messaging.

Dubbed Private Conversations, the new feature which is about to be introduced in Skype will offer end-to-end encryption for audio calls, text, and multimedia messages like videos and audio files.


"Skype Private Conversations give you enhanced security through end-to-end encryption with an additional layer of security for conversations between you and your friends and family," the company announced.

"Private Conversations can only be between you and one other contact. This is not supported in groups."

How to Start Skype End-to-End Encrypted Calls and Chats

Private Conversations is already available to the Skype Insider program—a platform that allows Skype users to test new features before they rolled out to the rest of its over 300 million of users worldwide.

Unlike WhatsApp, end-to-end encryption feature is not enabled by default in Skype and users need to select 'New Private Conversation' from the app's "Compose" menu, or from another user's profile to initiate a secure communication—it's like Facebook Messenger's Secret Conversations, which is also based on of Signal.

Unfortunately, Private Conversations also doesn't currently support video calling, but this is secured by the standard encryption that Microsoft already provides with its Skype service.

Also, even with Private Conversations enabled, Skype will still be able to access some information (metadata) about your secure communications, like when you initiate them, and how long the conversation last.