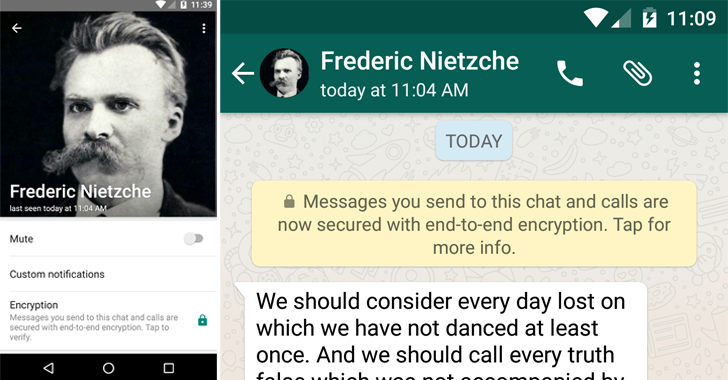 WhatsApp is updating its messaging app so that every text message and voice call will be encrypted for the company's one billion users.

Yes, Whatsapp has finally implemented full end-to-end encryption, as promised a year ago.

This means, from now every message, image or voice call you made will be secured by end-to-end encryption so that only you and the person you're communicating with can read the content of the message, and nobody in between, not even WhatsApp.

In other words, this also means that WhatsApp would not be able to comply with any court order that demands access to the content of any conversation happens over its service.

Starting today, you will see a notification on your WhatsApp conversation screen as your messenger becomes end-to-end encrypted, as shown in the screenshot.


"Message you send to this chat and calls are now secured with end-to-end encryption. Tap for more info."

"This is because your messages are secured with a lock, and only the recipient and you have the special key needed to unlock and read them," Whatsapp says.

Additionally, you will be able to see a small lock icon below the profile of the recipient that ensures your conversation is secured with encryption.


"All of this happens automatically: no need to turn on settings or set up special secret chats to secure your messages," the company adds.

How to verify if someone is trying to spy on your conversation?


Well, the latest version of WhatsApp mobile application offers you an option to verify the keys of the other users with whom you are communicating, ensuring prevention from the man-in-the-middle attack.

Whatsapp key verification can be done by scanning a QR code, or by comparing a 60-digit number, under newly introduced "verify security code" option in the WhatsApp.

"WhatsApp users can opt in to a preference which notifies them every time the security code for a contact changes." 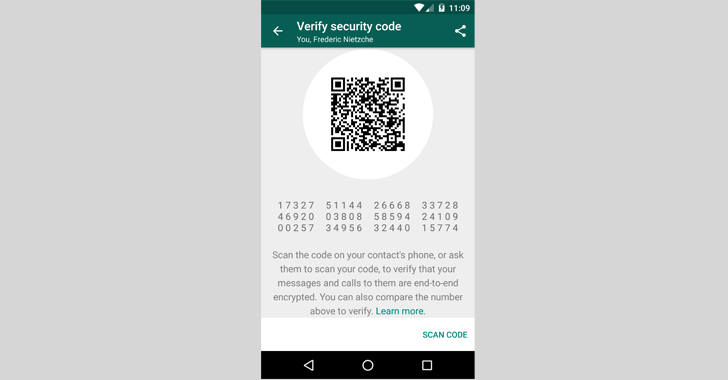 About a year ago, Facebook partnered with 'Open Whisper System', company behind the popular Signal and TextSecure encryption apps, to integrate the Signal's Open source strong encryption protocol into WhatsApp messaging app.

Also Read: How to Run Multiple WhatsApp Account One Phone

Important Note — However, there is one point to be noted that if several users are sending texts in a group chat and one of the users is running an older version of WhatsApp that doesn't support encrypted messages, all the conversation going through that group chat will remain unencrypted.