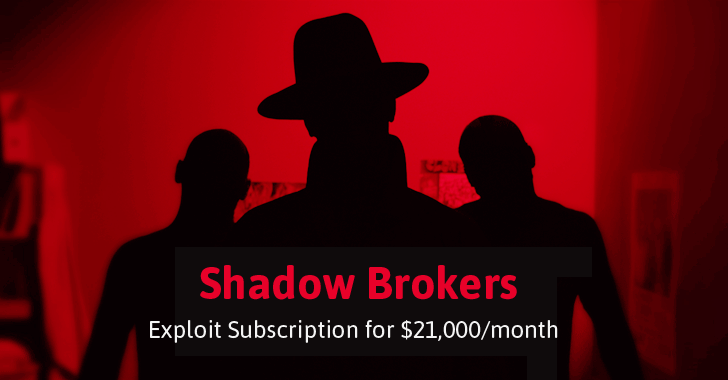 As promised to release more zero-days exploits and hacking tools for various platforms starting from June 2017, the infamous hacking group Shadow Brokers is back with more information on how to subscribe and become a private member for receiving exclusive access to the future leaks.

The Shadow Brokers is the same hacking group who leaked NSA's built Windows hacking tools and zero-day exploits in public that led to the WannaCry menace.

When the Shadow Brokers promised its June 2017 release two weeks ago, the group announced that it would sell new zero-day exploits and hacking tools only to the private members with paid monthly subscription, instead of making them public for everyone.

How to Become Member of the 'Wine of Month' Club?


Now, just a few minutes ago, the hacking collective has released details about how to participate in the monthly subscription model – or the "Wine of Month Club," as the group called it – to get exclusive access to the upcoming leaks each month starting from June.

So, those who are interested in buying the membership of the "wine of month club" would require to:


Once done, the Shadow Brokers will send a payment confirmation email to "delivery email address" provided by all interested members.

Launched in late October, Zcash is a new cryptocurrency currency that claims to be more anonymous than Bitcoin, as the sender, recipient, and value of transactions remain hidden. However, the group said, it doesn't even trust Zcash and Tor for absolute anonymity.


"Zcash is having connections to USG (DARPA, DOD, John Hopkins) and Israel. Why USG is "sponsoring" privacy version of bitcoin? Who the fuck is knowing? In defense, TOR is originally being by similar parties. TheShadowBrokers not fully trusting TOR either," the Shadow Brokers writes.


What is Going to be in the Next Data Dump?


The hacking collective says the membership has been kept expensive because the data dump has been intended for hackers, security companies, government, and OEMs.


"If you caring about losing $20k+ Euro then not being for you. Monthly dump is being for high rollers, hackers, security companies, OEMs, and governments," the Shadow Brokers say.

Although what the June dump would contain is not clear at the moment, the Shadow Brokers' last announcement claimed that the upcoming data dump would include:

Keeping in mind the last disaster caused due to the leaked NSA exploits, it would not be wrong if security companies buy the June dump for $21,000 per month and secure their products before hackers get their hands on new zero-day exploits to wreak havoc across the world.

The claims made by the Shadow Brokers remain unverified at the time of writing, but since its previously released dump turned out to be legitimate, the group's statement should be taken seriously, at least now, when we know the NSA's backdoors released by the group last month were used by WannaCry and other malware to cause chaos worldwide.

If the announcement made by the Shadow Brokers comes out to be true, the world should be well prepared for another WannaCry-like massive destroyer.


Before publicly dumping the stolen NSA zero-day exploits in April, the Shadow Brokers put an auction of those cyber weapons for 1 Million Bitcoin.

Although the auction did not go well, the Bitcoin address setup by the hacking collective to collect bids has received a total of 10.5 Bitcoin (around $24,000).

Finally, on Monday, the Shadow Brokers emptied their Bitcoin account, moving all the Bitcoins to subsidiary Bitcoin addresses.