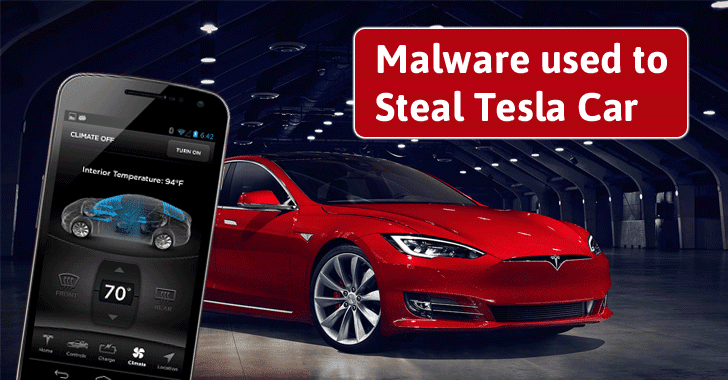 New technology is always a little scary, so are Smart Cars. From GPS system and satellite radio to wireless locks, steering, brakes, and accelerator, today vehicles are more connected to networks than ever, and so they are more hackable than ever.

It's not new for security researchers to hack connected cars. Previously they had demonstrated how to hijack a car remotely, and how to disable car's crucial functions like airbags by exploiting security bugs affecting significant automobiles.

Now this time, researchers at Norway-based security firm Promon have demonstrated how easy it is for hackers to steal Tesla cars through the company's official Android application that many car owners use to interact with their vehicle.

Two months ago, Chinese security researchers from Keen Lab managed to hack a Tesla Model S, which allowed them to control a car in both Parking and Driving Mode from 12 miles away.

However, Promon researchers have taken an entirely different approach.


The researchers infected a Tesla owner's phone with Android malware by compromising the Tesla's smartphone app, allowing them to locate, unlock and drive away with a Tesla Model S.

However, Tesla has clarified that the vulnerabilities used in the latest attack do not reside in its app, rather the attack employed known social engineering techniques that trick people into installing malware on their Android devices, which compromise their entire phone and all apps, including Tesla app.

In a blog post, Promon researchers explained that Tesla app generates an OAuth token when a Tesla owner log in to the Android app for the first time. The app then uses this token, without requiring the username and password every time the owner re-opens the app.

This OAuth token is then stored in plain text into the device's system folder which can be accessed by privileged root user only.

Researchers Demonstrates How to Steal a Tesla Car:


According to researchers, it is easy for an attacker to develop a malicious app that contains Android rooting exploits such as Towelroot and Kingroot, which can then be used to escalate the malicious app's privileges, allowing attackers to read OAuth token from the Tesla app.

Stealing this token could enable an attacker to locate the car and open its doors, but could not help the attacker start and drive away with the owner's car.

For this, the malware needs to delete the OAuth token from the owner's phone, which prompts the owner to enter his/her username and password again, allowing the attacker to collect the owner's login credentials.

Researchers say this can be done by modifying the original Tesla app's source code. Since the malware has already rooted the owner's smartphone, it can alter the Tesla app and send a copy of the victim's username and password to the attacker.
With this data, the attacker can perform a series of actions, like locating the car on the road, open its doors, start the car's motor and drive the car away unhindered, just by sending well-crafted HTTP requests to the Tesla servers with the owner's OAuth token and password.

Tesla says it is not the issue with its product but common social engineering tricks used by attackers to first compromise victim's phone, rooting the device and then altering its apps data.

The researchers' attack is only possible when an attacker convinces a victim into downloading a malicious app on his/her Android device.