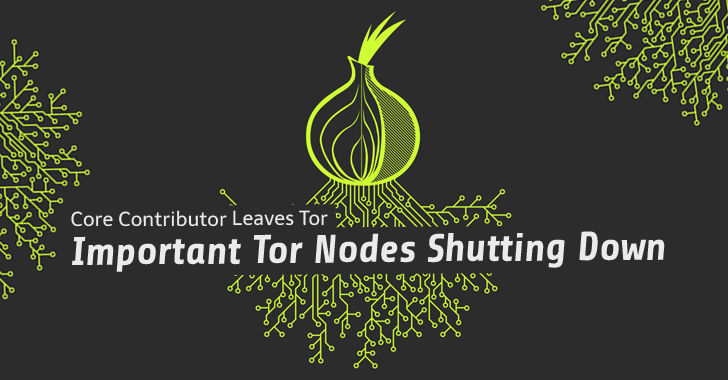 Another blow to the Tor Project: One of the Tor Project's earliest contributors has decided to quit the project and shut down all of the important Tor nodes under his administration.

However, Green announced last weekend that "it is no longer appropriate" for him to be part of the Tor Project, whether it is financially or by providing computing resources.

TOR, also known as The Onion Router, is an anonymity network that makes use of a series of nodes and relays to mask its users' traffic and hide their identity by disguising IP addresses and origins.

The TOR network is used by privacy-conscious people, activists, journalists and users from countries with strict censorship rules.

Crucial and Fast TOR Nodes to be Shut Down Soon

Bridge Authorities are critical network components that have their IP addresses hard-coded in the TOR apps, allowing the anonymity network to prevent various bans and blocking attempts at the ISP level. These nodes also hold critical data regarding other TOR nodes.

Must Read: Here's Why Riffle Anonymity Network is Better than TOR.

So, practically, Lucky Green's exit from the Tor Project is a big deal.

Green didn't give the exact reason behind his decision to leave the Tor Project, though he hinted that "recent events" lead to his exit. Here's what he said:


"I feel that I have no reasonable choice left within the bounds of ethics, but to announce the discontinuation of all Tor-related services hosted on every system under my control. I wish the Tor Project nothing but the best moving forward through those difficult times."

Although it is not clear, the recent event could be the result of the turmoil in the Tor Project, which surfaced when Jacob Appelbaum forced to leave the Tor Project amid some serious sexual allegations. Appelbaum strongly denies these accusations, but still decided to step down.

Green is not immediately closing down these crucial TOR nodes. He will shut down these nodes, as well as their associated cryptographic keys, on August 31, giving the Tor developers enough time to update their network.