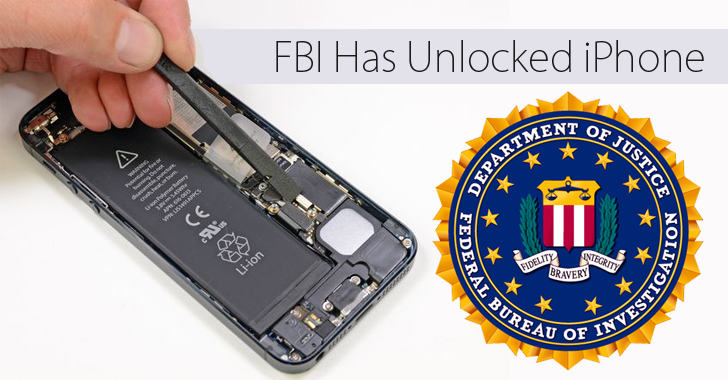 End of Apple vs. FBI. At least for now, when the FBI has unlocked iPhone successfully.

Yes, you heard it right. The Federal Bureau of Investigation (FBI) has unlocked dead terrorist's iPhone 5C involved in the San Bernardino shooting without the help of Apple.

After weeks of arguments, the United States government is withdrawing its motion compelling Apple to build a backdoored version of its iOS that can help the agency unlock iPhone of San Bernardino gunman Syed Farook.

The Department of Justice (DOJ) says that FBI has successfully accessed iPhone's data with the help of an undisclosed alternative method and that it no longer needs Apple's assistance.

"The government has now successfully accessed the data stored on Farook's iPhone and therefore no longer requires the assistance of Apple," the attorneys wrote in a court filing Monday. "Accordingly, the government hereby requests that the Order Compelling Apple Inc to Assist Agents in Search dated February 16, 2016, be vacated."

Meanwhile, a DoJ spokeswoman said in a statement: "The FBI is currently reviewing the information on the phone, consistent with standard investigatory procedures."

Last week, the DoJ delayed its court hearing against Apple so it could try a possible method of unlocking iPhone for which they have hired an "outside party".

At the time, Apple said it did not know any way to gain iPhone's access but hoped that the Feds would share with them any information of loopholes that might come to light in the iPhone.

Although the technique the FBI used to crack the iPhone is not disclosed and likely will not be any time soon, several experts suspect it involved NAND Mirroring.

Nand Mirroring is a technique used to copy the contents of the phone's NAND memory chip and flash a fresh copy back onto the chip when the max number of attempts is exceeded.

With the discovery of the alternative method, the legal battle between the FBI and Apple seems to be over in this particular case, but it does not end the overall battle about privacy and security.

As Apple has issued a statement, saying the company is committed to continuing its fight for civil liberties and collective security and privacy.

The full statement (via Verge) from Apple reads:

From the beginning, we objected to the FBI's demand that Apple builds a backdoor into the iPhone because we believed it was wrong and would set a dangerous precedent. As a result of the government's dismissal, neither of these occurred. This case should never have been brought.

We will continue to help law enforcement with their investigations, as we have done all along, and we will continue to increase the security of our products as the threats and attacks on our data become more frequent and more sophisticated.

Apple believes deeply that people in the United States and around the world deserve data protection, security and privacy. Sacrificing one for the other only puts people and countries at greater risk.

This case raised issues which deserve a national conversation about our civil liberties, and our collective security and privacy. Apple remains committed to participating in that discussion.