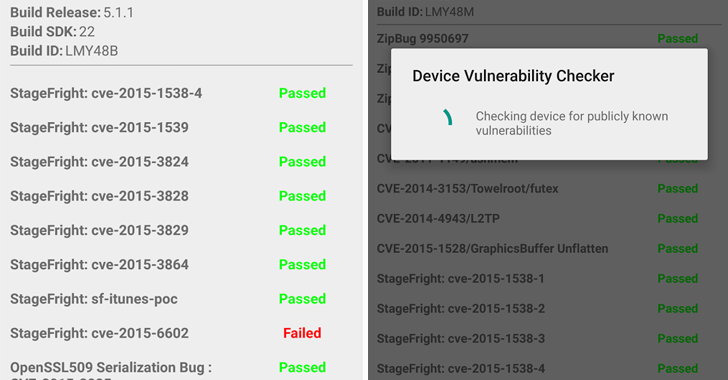 Vulnerabilities are common these days and when we talk about mobile security, this year has been somewhat of a trouble for Android users. Almost every week we come across a new hack affecting Android devices.

One of the serious vulnerabilities is the Stagefright Security Bug, where all it needed to install malicious code on the Android devices was a simple text message.

Although Google patched these security holes in its latest Android update, manufacturers can take a long time to release their own updates, and it's even possible that older devices may not get the updates at all.

So, even after the release of patches for these critical vulnerabilities, it is difficult to say which Android devices are at risk of what bugs.

There is a one-click solution to this problem. One Android app can help educate you and help you know whether your devices is at risk.

One-Click Solution to Check Your Device for All Critical Bugs

Android Vulnerability Test Suite (VTS), developed by mobile security firm NowSecure, is a free vulnerability scanner that scans your Android device for 22 known device vulnerabilities including Stagefright, potentially alerting you to any of the known issues.

This free, open source Android vulnerability scanner tool is "meant to show the end user the attack surface that a given device is susceptible to."

As NowSecure says on the VTS' Google Play listing, "In implementing these checks we attempt to minimize or eliminate both false positives [as well as] false negatives without negatively affecting system stability."

Note: Your Antivirus product may detect this tool malicious in nature because it contains Stagefright detection code.

As VTS vulnerability scanner is an open-source project from a known and trusted developer, users and security researchers can file bugs or other issues on the GitHub repository.

How to Check your Android Device for All 22 Vulnerabilities?

Install VTS for Android and hit the Search button when it appears to launch the Device Vulnerability Scanner.

After about 30 seconds, the Android vulnerability scanner will list all vulnerabilities your devices is vulnerable to.

I tested the app on my fully-patched OnePlus Two smartphone earlier this week and found my device is vulnerable to a few vulnerabilities, including the new variant of the Stagefright bug, Stagefright 2.0.

Go and Check your device immediately.