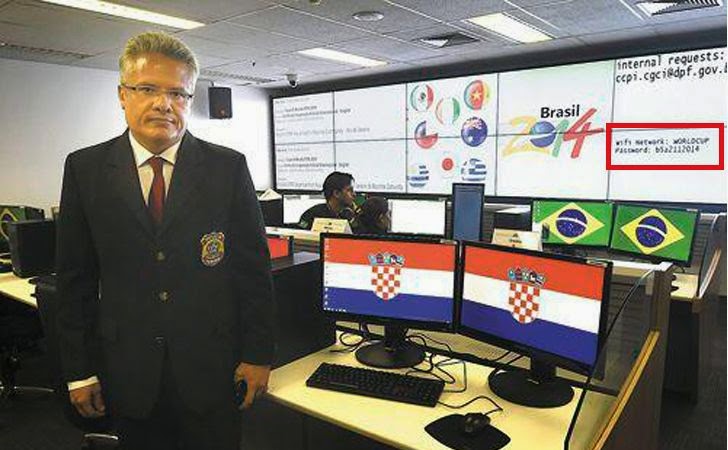 This FIFA World Cup, the security has been really going well and yet no calamitous incident reported so far, other than the security company who is responsible to keep an eye on the event's security, itself tweeted a photograph of their state-of-the-art monitoring centre that exposed the World Cup security centre's internal Wi-Fi password to the whole world.

Israel-based security firm RISCO is providing security management at the soccer stadium and very proud of their incredible work in securing this year's World Cup, which includes monitoring and maintaining hundreds of CCTV security cameras all over the 41,000-seat Arena Pantanal football stadium in Cuiaba, Brazil.

The image was posted on Twitter and has been re-tweeted almost 3,000 times.

The World Cup security centre allows security personnel to view live feeds from various cameras around the World Cup stadiums. But, inadvertently it exposed Wi-Fi SSID and password in the background of the pic on the big screen that anyone can read with a squint of the eye. It reads :

The password appears to be "brazil2014" in leet speak. I think it's completely unguessable and the most secure one for this highly considered World Cup event. Haaa!

This accidentally leaked Wi-Fi Credentials from the Security Centre of the biggest game on the Earth could have given cybercriminals opportunity to carry out man-in-the-middle attacks to break into their network and compromise the systems.

But, definitely after media updates, they would have realized their mistake and updated the WiFi SSID and password for the football World Cup's security center secretly.