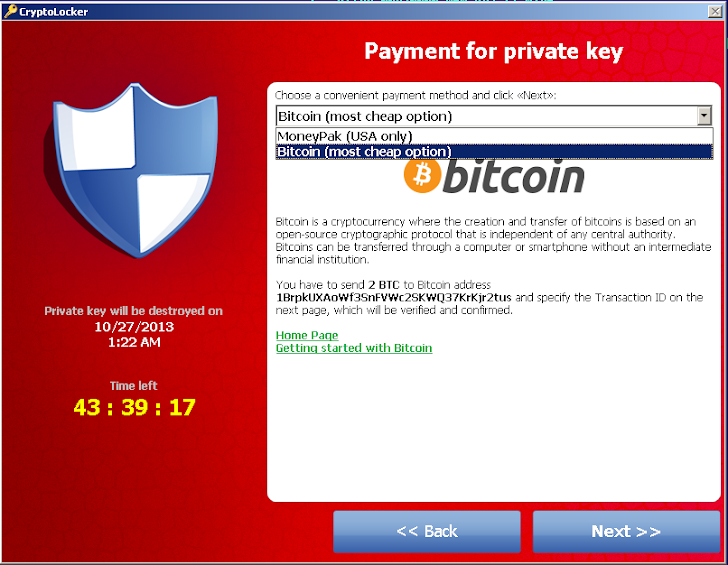 The CryptoLocker Malware continues to spread, infected more than 12,000 U.S computers in one week and threatening millions of computers in the UK.

Just last week, The UK National Crime Agency urge people afflicted by CryptoLocker not to pay ransom, not least because there is no guarantee that they will even receive an unlock key.

Not even Police departments are immune to CryptoLocker. In November second week, Massachusetts' Swansea Police Department paid a 2 Bitcoin ($750 that time) ransom to decrypt images and Word documents encrypted by CryptoLocker ransomware.

"It gave us 100 hours to pay and it was literally a timer," said Police Department. "A big red screen comes up with a timer that says you have 100 hours to pay or your files will be encrypted forever."

Malware usually distributed through spam emails, encrypting the user's files on the infected machine and also the local network it is attached to. However, Police Department said the virus did not affect the software that the police use in reports or booking.

Security experts also commented that "The only reason this type of attack success is because people are willing to pay up. If no one ever paid, there would be no ransomware." But will they also not pay ransom for their very important files, if encrypted by malware ? Definitely everyone will, as the Police have to. Other attackers are also moving in this direction as well.

There are many other ways, following that you can protect your system from CryptoLocker before infection. Ensure you have best one active and up-to-date and if a computer becomes infected it should immediately be disconnected from any networks.