Aug 16, 2013Mohit Kumar
More than 9000+ participants enter the Guinness book of World Records for the largest congregation for information Security.

E-Hack, world largest Ethical Hacking workshop was organized by InfySEC at SRM University on July 27 and 28,2013 . The expected participant count was 4500+ but on the day of the event the participant count were as high as 9637 students participated to be a part of E-HACK making it the LARGEST IT SECURITY AWARENESS MARATHON GLOBALLY , which made the organizing team to facilitate other two mini auditorium available in the same venue with speakers like Mr. Karthikeyan,founder of Zazvik Solutions, Mr.Santhosh Srinivasan, director of Symantec,Mr.Patrick Martinent, a Google developer Expert, Mr. Vinod Senthil,Director of Infysec, Mr.Ashish Chandra Mishra,Chief Information Security Officer at Tesco HSC, Mr. Rishi Narang,lead consultant with Aujas Networks , VT Gopal - Professor, Anna University and Dr.Prateep V.Philip IPS,AGDP, Tamil Nadu Crime Division.

The Event was inaugrated by The Vice Chancellor of SRM university Mr.PonnaVaikko along with the Mr.Vinod Senthil T, brain behind E-HACK. E-hack took a giant leap with a trendsetting event that is recorded in Asia Book of records, Indian Book of records and TamilNadu book of records.24 hours of live Ethical hacking sessions gave good knowledge to everyone who were part of it.

This event also happened to be the biggest auditorium in asia at SRM University and it went around the clock with a great support and lively audience. E-Hack apart from the Workshop and Capture the flag (CTF) hosted a number of entertaining performances for their audience to stay them awake. 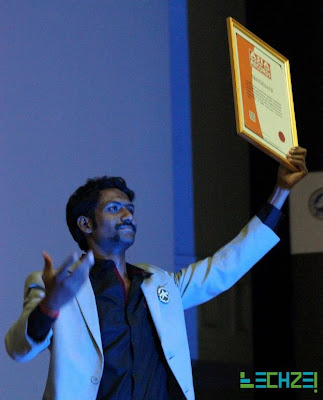 The hit of the event was DJ Latish from Burj Kalifa who left the crowd dancing to his music. The winner of the CTF, Chandrashekhar Singh took home a Mahindra Centro Motor Bike followed by the runner Yaser who took home an Panasonic LCD TV and the second runner Madhan took home a Asus Laptop. The crowd did not waver, even at breaks sat in all game.

With thousands of participants, hundred organizers and one team to lead, it was mind-blowing record with the for the longest IT security marathon had count of 6321 participants.

The event was parallely conducted in various parts of the globe in the name of E-HACK x10ded (extended) , the event was webcasted and there were as high as 1,65,000 online viewers. Apart from this, there were organizations like Rotary club of mysore, University of southern california, university of berkeley hosted the ehack x10ded event in which rotary club Mysore hosted ehack x10ded with over 50+ participants.

Since the event can be access from live webcast relayed from www.ehack.in on the day of the event and the CTF game can be accessed online, there were almost 1,73,000 Online and physical viewers. There were over 14 lacs of online viewers who play the CTF game to learn how the attackers work and how to mock it down.

Highlights of the event :
The Closing note was addressed by Mr.Karthick Vigneshwar who is the Director of infySEC, United Kingdom. Also for the benefit of the audience www.ctf.ehack.in is still up and available for end users to make use of which is Live Capture the Flag.

If you wish to be a part of making the Internet a Secure place to live, Join in organizing Such programs across India ,contact enquiry@infysec.com for more information.