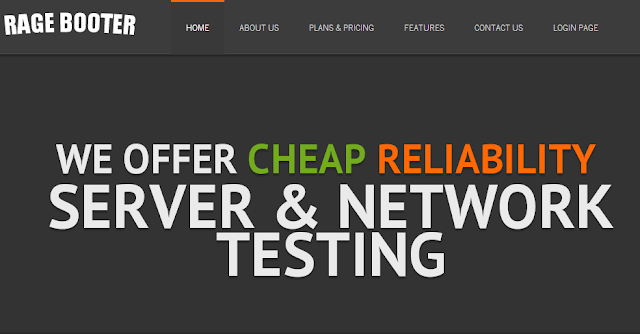 A website that can be described as "DDoS for hire" is perfectly legitimate, according to the owner. Malicious sites that offer attack services are not strangers on the Internet, but web sites sponsored by law enforcement is another story altogether.

Ragebooter, is one of many sites that accepts payment through PayPal in order to flood sites with junk traffic, overloading servers and denying others access. The service uses a technique called DNS reflection to flood a website and amplify the amount of traffic directed at an address.

Unlike other existing sites that offer similar services, the Ragebooter have particularly interesting back door leading directly to the FBI. It seems that the Federal Investigation Bureau uses the site to monitor the activity of users on the network, and that added to the site IP Logger that keeps the IP addresses of all users coming to the site.

Investigation shows the site operator is a guy named Justin Folland located in Memphis Tennessee. "Since it is a public service on a public connection to other public servers this is not illegal. Nor is spoofing the sender address. If the root user of the server does not want that used they can simply disable recursive DNS. My service is a legal testing service. How individuals use it is at their own risk and responsibilities. I do not advertise this service anywhere nor do I entice or encourage illegal usage of the product. How the user uses it is at their own risk. I provide logs to any legal law enforcement and keep logs for up to 7 days."

He claimed that his service was not used to attack people, but only for legitimate stress-testing, then he changed his story and said he was only managing the service for someone else. It is not clear if it is a guy who works with the FBI, but what is certain is that the service is alive and kicking. An FBI spokesman would neither confirm nor deny the claim.