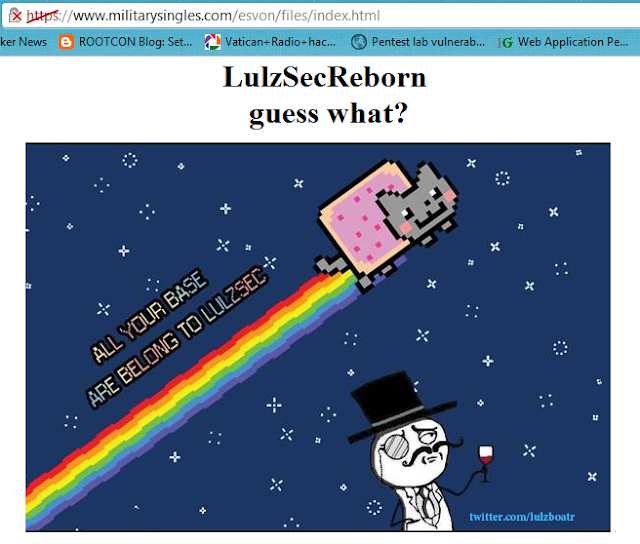 Another Hacking group after Lulzsec, comes with name LulzsecReborn has posted names, usernames, passwords, and emails of 170,937 accounts on MilitarySingles.com on Pastebin as part of the group's Operation Digiturk. LulzSec was a major ticket item last year as the group hacked a number of high profile Web sites all in the name of the "lulz." After their so called "50 Day Cruise," the group broke up and went their separate ways.Hacker claim that, There are emails such as @us.army.mil ; @carney.navy.mil ; @greatlakes.cnet.navy.mil ; @microsoft.com ; etc.. in dump.
In response to a query by the Office of Inadequate Security, ESingles, the parent company of MilitarySingles.com, said that there is "no actual evidence that MilitarySingles.com was hacked and it is possible that the Tweet from Operation Digiturk is simply a false claim.". LulzSecReborn hack the site and added his deface page here, (as shown in above page) and replied "Stupid Administrator: 'There is no evidence MilitarySingles is hacked'. Well guess what?"
Commenting on the breach, the Office of Inadequate Security said: "If you know a member of the military who uses or has used the site, do them a favor and suggest they change their password on any site where they may have reused it – including their mil.gov email account."
In a video posted to YouTube last weekend and titled LulzSec Returns, the group says it decided to "bring back our humble hacking group and set sail towards the interwebs again". Referring to the arrests, it said these had "merely disrupted the active faction".
Lulz Security, the group of hackers that had attacked several government and corporate sites before disbanding last year, hinted at a comeback on April 1.