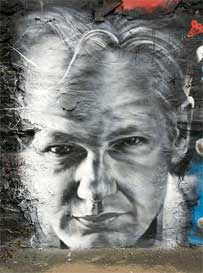 What is the future of political protest, as in a highly digitized world? We follow the real-time display via Wikileaks Cablegate.

The day of the cables has been convicted for release in major newspapers worldwide, called a "political hack" cut the Wikileaks site with a distributed denial of service (DDoS). Later he wrote about Twitter that he went after the site for "attempting to give life to our troops and other assets."

[Related Article: How to identify and avoid scams Internet]

Since Visa.com was hit by a DDoS attack, including the website of the Swedish Ministry and the lawyer representing two women who made allegations of sexual misconduct against Wikileaks founder Julian Assange. As the story progresses, I'm sure we'll see more sites for and against Wikileaks, suffers attacker angry.

This is not the first example of a DDoS attack, the domino effect, but it is certainly the highest profile. We are sure to see more stories like this. With the success of films like The Girl with the Dragon Tattoo, where piracy against the government and the forces of social evil is brought to a new kind of heroism, we are forced to learn more. The mythology is already forming: a new kind of cyberwar dedicated to the endless battle between good and evil.

But with all these stories, we can not lose sight of the lesson. The data breach that started it all, like so many others who are not the headlines, the result of poor access to information. Protests and political side, the security professionals need to understand the risk of large systems, where information is shared between different organizations. The tale of Army Private with access to high-level State Department information should compel us not only to comment on the story, or pay online protest, but to ask the fundamental questions of computer security: Who has access to your information? And are they being investigated?