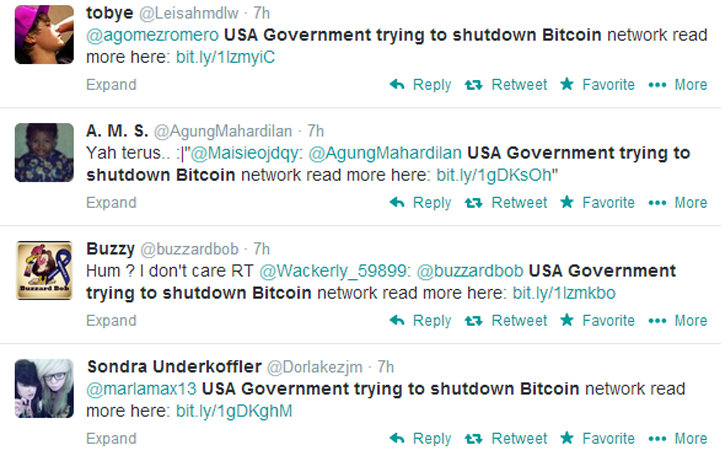 May 25, 2014
The Security Software company Malwarebytes has discovered a malicious scam spreading through rogue tweets by a number of fake Twitter accounts with a link to a story that says the United States Government is trying to ban cryptocurrency Bitcoin. " The majority of the accounts pushing these things are clearly fake, using gathered Twitter handles to launch the barrage of malicious spam at the Twitterverse, " wrote Adam Kujawa of Malwarebytes in a blog post on Thursday. In most cases, cybercriminals use to spread the malicious software via an email, but distribution of malware through social media is relatively new tantrum of cyber criminals, as more people are fond of social media platforms now a days. Adam discovered the scam and according to him the worst part of this new Twitter scam is that even without realizing the impact of this fake news, other Twitter users are retweeting from their accounts, making the malware scam more worse. The tweets contain links lead

Scam Alert : You are Twitter 'User For The Month'

Nov 03, 2012
The growing popularity of microblogging sites like Twitter has sparked a corresponding rise in social networking scams. If you receive an email or direct message (DM) on Twitter with text " Hello, You have been selected to be the Twitter user for the month! We've got a reward for you text this word ITweet to the following number 6 8 3 9 8 " , don't bother replying the mail. Mary C. Long actually notice this scam and write a quick warming on his blog .  Those who send messages to the number provided by the scammers are actually handing over their phone numbers to the crooks. They can use the information for smishing attacks and all sorts of other malicious plots , Eduard Kovacs from Softpedia explains . Here a small list of most common Twitter-Facebook Scam messages , If any of this phishing scheme sounds familiar, ignore the message. i got mine yesterday you even see them taping u him what on earth you're doing on this movie O M G your in this what on earth could you be
Next Page 