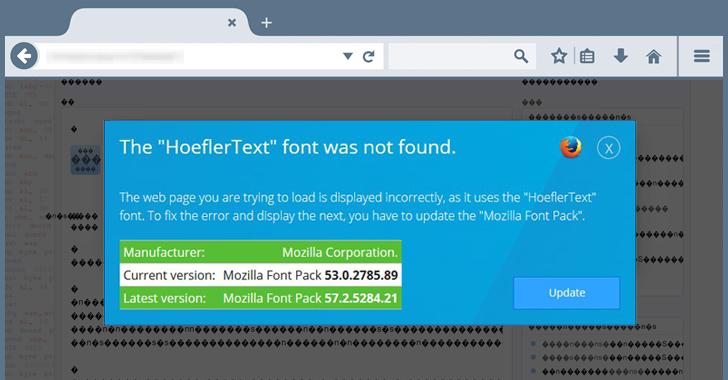 May 05, 2017Wang Wei
The malicious scam campaign, " The 'HoeflerText' font wasn't found ," is back, which was previously targeting Google Chrome users to trick them into installing Spora ransomware on their computers. This time the campaign has been re-designed to target Mozilla Firefox users with a banking trojan, called Zeus Panda , says   Kafeine , a security researcher at Proofpoint. Interestingly, the attackers behind this new campaign are so stupid that they forgot to change the name of the font, i.e. HoeflerText, due to which can be easily spotted. As I previously warned — Next time when you accidentally land up on a suspicious website with jumbled content prompting to update the Firefox or Chrome font pack by downloading a missing text font to read the article… Just don't download it. It's obviously a trap. Just like the previous one, the latest Firefox 'HoeflerText font wasn't found scam is also very convincing and easy to fall for. The attack in
Next Page 
Popular This Week
Become a White Hat Hacker — Get 10 Top-Rated Courses at 97% OFF
Interpol Arrests 3 Nigerian BEC Scammers For Targeting Over 500,000 Entities
Digitally Signed Bandook Malware Once Again Targets Multiple Sectors
Facebook Messenger Bug Lets Hackers Listen to You Before You Pick Up the Call
2-Factor Authentication Bypass Flaw Reported in cPanel and WHM Software
China's Baidu Android Apps Caught Collecting Sensitive User Data
Online Courses and Software