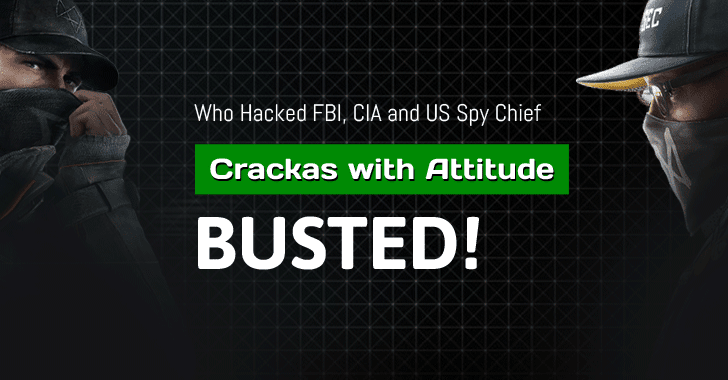 September 09, 2016Mohit Kumar
US authorities have arrested two North Carolina men on charges that they were part of the notorious hacking group " Crackas With Attitude ." Crackas with Attitude is the group of hackers who allegedly was behind a series of audacious and embarrassing hacks that targeted personal email accounts of senior officials at the CIA, FBI, the White House, Homeland Security Department, and other US federal agencies. Andrew Otto Boggs, 22, of North Wilkesboro, N.C., who allegedly used the handle " INCURSIO ," and Justin Gray Liverman, 24, of Morehead City, who known online as " D3F4ULT ," were arrested on Thursday morning on charges related to their alleged roles in the computer hacking, according to a press release by Department of Justice. A 16-year-old British teenager suspected of being part of the group was arrested in February by the FBI and British police. Although court documents did not name the victims, the hacking group had allegedly: Hacked

March 02, 2016Swati Khandelwal
What If Apple Engineers are Kidnapped and Forced to Write (Exploit) Code? Exactly this was what FBI Director James Comey asked in the congressional hearing on Tuesday. The House Judiciary Committee hearing on "The Encryption Tightrope: Balancing Americans' Security and Privacy" over the ongoing battle between Apple and the FBI ended up being full of drama. The key to the dispute is whether the Federal Bureau of Investigation (FBI) can force Apple to develop a special version of its mobile operating system that would help the agency unlock an iPhone  belonged to San Bernardino shooter Syed Farook . FBI Director James Comey was there with a prepared testimony about why the FBI wants Apple to create a backdoor into the killer's iPhone. Comey: Encryption is a Long-Term Threat to Law Enforcement Yesterday, a New York magistrate judge refused a similar order in a drug case in which the authorities asked Apple to help with the data stored in an
Next Page 