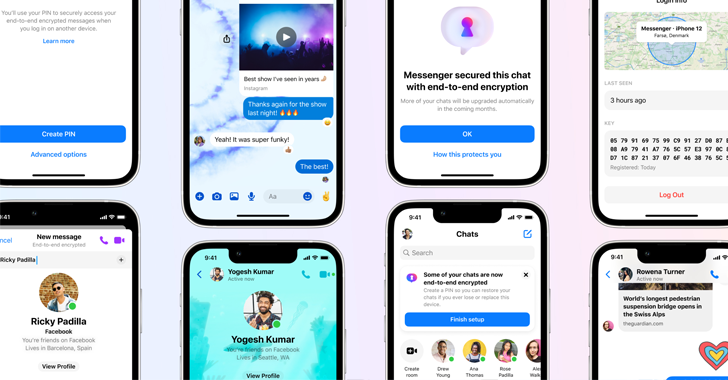 Meta Platforms on Monday announced that it has started to expand global testing of end-to-end encryption (E2EE) in Messenger chats by default.

"Over the next few months, more people will continue to see some of their chats gradually being upgraded with an extra layer of protection provided by end-to-end encryption," Meta's Melissa Miranda said.

The social media behemoth said it intends to notify users in select individual chat threads as the security feature is enabled, while emphasizing that the process of choosing and upgrading the conversations to support E2EE is random.

"It's designed to be random so that there isn't a negative impact on our infrastructure and people's chat experience," Miranda further explained.

Along with flipping the switch on E2EE, Meta has also added more features into its encrypted chat experience, including support for themes, custom emojis and reactions, group profile photos, link previews, and active status.

The latest development comes a little over five months after it officially began testing the feature as a default in August 2022. It's, however, worth noting that E2EE was enabled as an opt-in nearly seven years ago in the form of "secret conversations."

In comparison, WhatsApp already has E2EE enabled out of the box, and Instagram lets users switch on E2EE for individual conversations.

The security setting is also part of Meta's broader "privacy-focused vision for social networking," which it hopes to roll out across Messenger and Instagram at some point this year after taking additional time to "get this right."

The move further arrives amid a broader push by tech giants to incorporate encryption options in their services. Google, last month, introduced E2EE for group chats with as many as 100 users in its RCS-based Messages app for Android. The feature is currently limited to the beta version.

Apple, in a similar move, has unveiled an Advanced Data Protection option for iOS, iPadOS, and macOS that enables end-to-end encrypted data backups in its iCloud service. An encrypted chat feature for Twitter direct messages is presently in the works.