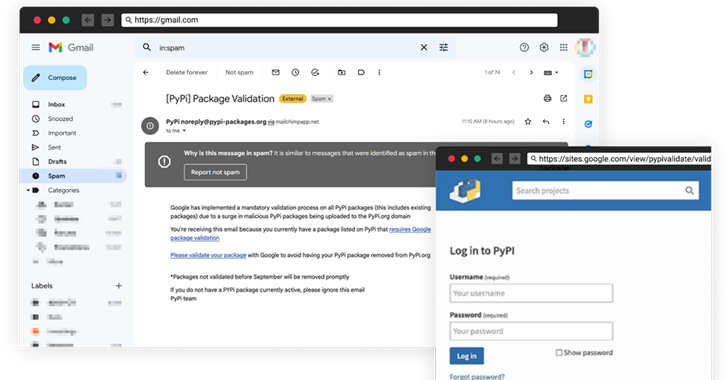 The Python Package Index, PyPI, on Wednesday sounded the alarm about an ongoing phishing campaign that aims to steal developer credentials and inject malicious updates to legitimate packages.

"This is the first known phishing attack against PyPI," the maintainers of the official third-party software repository said in a series of tweets.

The social engineering attack entails sending security-themed messages that create a false sense of urgency by informing recipients that Google is implementing a mandatory validation process on all packages and that they need to click on a link to complete the validation before September, or risk getting their PyPI modules removed.

Should an unsuspecting developer fall for the scheme, users are directed to a lookalike landing page that mimics PyPI's login page and is hosted on Google Sites, from where the entered credentials are captured and abused to unauthorizedly access the accounts and compromise the packages to include malware.

The modifications, for their part, are designed to download a file from a remote server. "This malware is untypically large, ~63MB, (possibly in an attempt to evade [antivirus] detection) and has a valid signature (signed on August 23rd, 2022)," Checkmarx researcher Aviad Gershon noted.

"These releases have been removed from PyPI and the maintainer accounts have been temporarily frozen," PyPI said. Three of the affected packages so far include "deep-translator," "exotel," and "spam." Additionally, several hundred typosquats are said to have been removed. 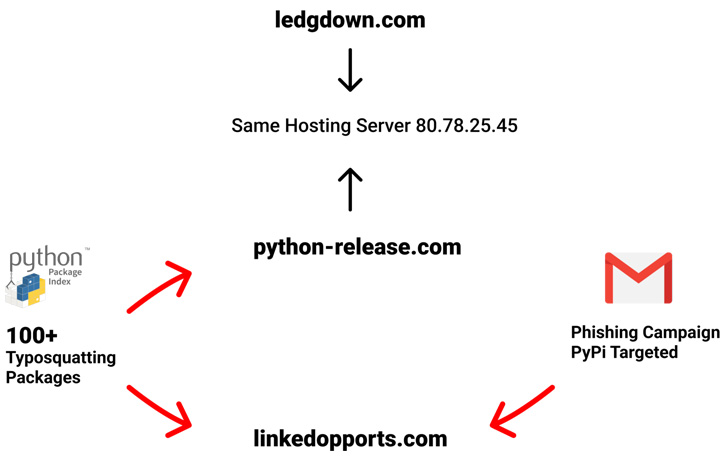 PyPI also said it's actively monitoring reports of new rogue packages and ensuring their removal. Developers who believe they may have been compromised should reset their passwords with immediate effect, reset 2FA recovery codes, and review PyPI account logs for anomalous activity.

The phishing attack is yet another sign of how the open source ecosystem is increasingly at risk from threat actors, who are capitalizing on libraries and projects that are woven into the fabric of several applications to mount supply chain attacks that can have cascading effects.

Earlier this month, researchers from Checkmarx disclosed two malicious Python packages – typing-unions and aiogram-types – that impersonated popular packages typing and aiogram to trick developers into downloading them and infect their machines with Cobalt Strike.

Another large-scale attack involved a threat actor publishing a dozen typosquatted packages under the names of widely-used projects with slight permutations to install a multi-stage persistent malware on compromised systems.

Update: Following the phishing attack, PyPI said it's revising its eligibility requirements for the hardware security key program. "Any maintainer of a critical project, regardless of whether they already have TOTP-based 2FA enabled, is now eligible," it noted.