"The emails contain malicious attachments or links that the receiver is encouraged to download," New Zealand's Computer Emergency Response Team (CERT) said. "These links and attachments may look like genuine invoices, financial documents, shipping information, resumes, scanned documents, or information on COVID-19, but they are fake."

Echoing similar concerns, Japan's CERT (JPCERT/CC) cautioned it found a rapid increase in the number of domestic domain (.jp) email addresses that have been infected with the malware and can be misused to send spam emails in an attempt to spread the infection further.

First identified in 2014 and distributed by a threat group tracked as TA542 (or Mummy Spider), Emotet has since evolved from its original roots as a simple banking Trojan to a modular "Swiss Army knife" that can serve as a downloader, information stealer, and spambot depending on how it's deployed.

In recent months, the malware strain has been linked to several botnet-driven malspam campaigns and even capable of delivering more dangerous payloads such as Ryuk ransomware by renting its botnet of compromised machines to other malware groups.

The new uptick in Emotet activity coincides with their return on July 17 after a prolonged development period that lasted since February 7 earlier this year, with the malware sending as many as 500,000 emails on all weekdays targeting European organizations.

"Around February 7, Emotet entered a period of time where they stopped spamming and began working on developing their malware," Binary Defence outlined in a report last month detailing an exploit (called EmoCrash) to prevent the malware from affecting new systems.

It works by exfiltrating email conversations and attachments from compromised mailboxes to craft convincing phishing lures that take the form of a malicious response to existing, ongoing email threads between the infected victim and other participants in order to make the emails seem more credible.

"TA542 also constructs phishing emails on the basis of information collected during the compromise of mailboxes, which it sends to exfiltrated contact lists, or more simply spoofs the image of entities, prior victims," the National Cybersecurity Agency of France (ANSSI) said. 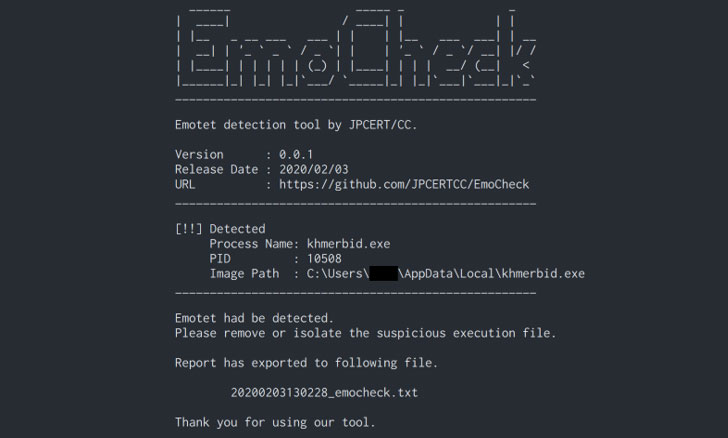 In addition to using JPCERT/CC's EmoCheck tool to detect the Emotet trojan's presence on a Windows machine, it's recommended that network logs are routinely scanned for any connection to known Emotet command-and-control (C2) infrastructure.

"Since returning from an extended vacation, TA542 email campaigns are once again the most prevalent by message volume by a large margin, with only a few other actors coming close," Proofpoint said in an exhaustive analysis of Emotet last month.

"They have introduced code changes to their malware, such as updates to the email sending module, and picked up a new affiliate payload to distribute (Qbot), [and] expanded targeting of countries using native language lures."