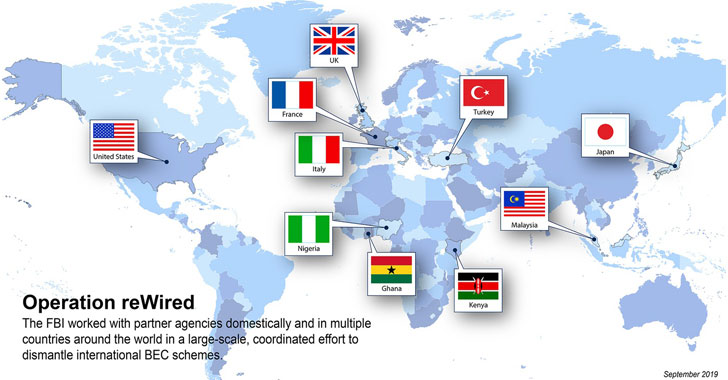 Breaking News — The Nigerian prince and his allies who might have also asked you over an email for your assistance to help save "the first African astronaut lost in space" have finally been arrested by the FBI.

Don't take it too seriously, as there's no Nigerian prince or an astronaut seeking your help.

Instead, it was an infamous 'Nigerian 419' scam email template where fraudsters try to dupe you into making a quick online payment by offering a share in a large sum of money on the condition you help them transfer money out of their country.

The FBI today announced the arrests of 281 suspects from around the world as part of an internationally coordinated law enforcement operation aimed at disrupting multi-billion-dollar BEC email and wire transfer scams.

According to the United States Department of Justice, 74 suspects were arrested in the United States, 18 in Turkey, 15 in Ghana and the rest of the arrests were made in France, Italy, Japan, Kenya, Malaysia, and the United Kingdom (UK).

Dubbed Operation reWired, the four-month-long global operation resulted in the seizure of nearly $3.7 million and follows a June 2018 email scam enforcement operation known as 'Wire Wire,' which lead to the arrest of 74 suspects around the world, seizure of almost $2.4 million, and recovery of nearly $14 million in fraudulent wire transfers.

The arrests primarily targeted scammers who were involved in Business Email Compromise (BEC) schemes, also known as "cyber-enabled financial fraud," where cybercriminals use a spoofed email or compromised account, impersonating the CEO or CFO, to trick someone in the finance department of a targeted company into initiating a money transfer to a fraudulent account.

"A number of cases involved international criminal organizations that defrauded small to large-sized businesses, while others involved individual victims who transferred high dollar funds or sensitive records in the course of business," the DoJ says.


"The devastating effects these cases have on victims and victim companies affect not only the individual business but also the global economy."


BEC scams are related to, and often conducted together with, other forms of frauds such as romance scams, employment opportunities scams, fraudulent online vehicle sales scams, rental scams, and lottery scams. 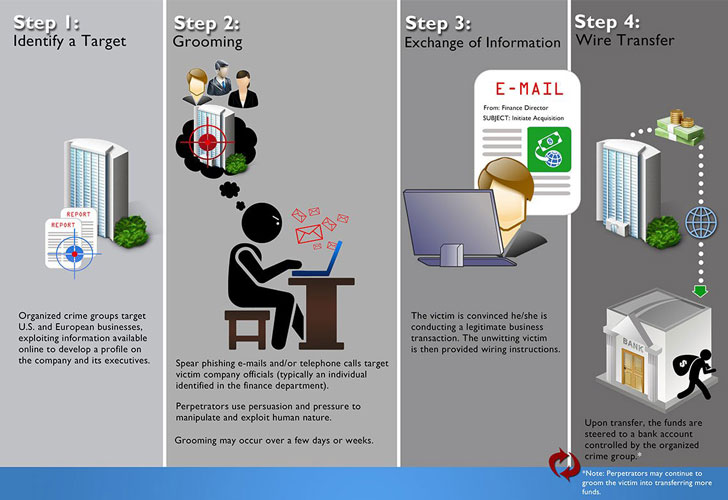 Investigators started targeting people involved in the BEC scam in May 2019 and discovered that "the conspirators stole more than 250,000 identities and filed more than 10,000 fraudulent tax returns, attempting to receive more than $91 million in refunds," according to Chief Don Fort of IRS Criminal Investigation.


According to the FBI's Internet Crime Complaint Center (IC3), between June 2016 and July 2019, there were over 166,000 domestic and international reports of email scams resulting in more than $26 billion in losses, up from a previous estimate of $12 billion.

In 2018 alone, nearly $1.3 billion, which is almost twice as much as 2017, in loses was reported from BEC scams and its variant, Email Account Compromise.

"Through Operation reWired, we're sending a clear message to the criminals who orchestrate these BEC schemes: We'll keep coming after you, no matter where you are," said FBI Director Christopher A. Wray.


"And to the public, we'll keep doing whatever we can to protect you. Reporting incidents of BEC and other internet-enabled crimes to the IC3 brings us one step closer to the perpetrators."


Several US authorities led this operation, including the FBI, over two dozen US Attorney's Offices, US Secret Service, Homeland Security Investigations, IRS Criminal Investigation, US Postal Inspection Service, and US Department of State's Diplomatic Security Service.