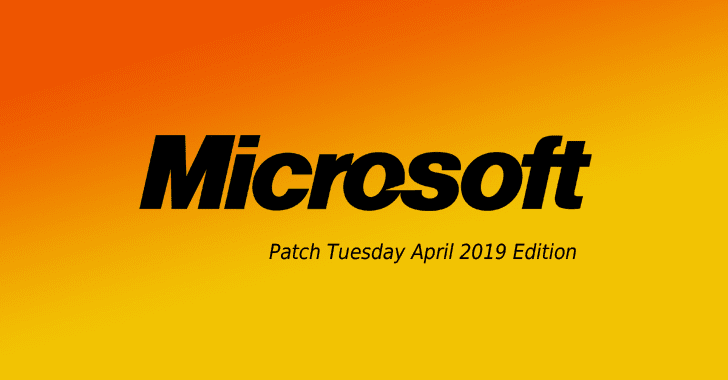 Microsoft today released its April 2019 software updates to address a total of 74 CVE-listed vulnerabilities in its Windows operating systems and other products, 13 of which are rated critical and rest are rated Important in severity.

None of the vulnerabilities addressed this month by the tech giant were disclosed publicly at the time of release, leaving the two recently disclosed zero-day flaws in Internet Explorer and Edge browsers still open for hackers.

However, two new privilege escalation vulnerabilities, which affect all supported versions of the Windows operating system, have been reported as being actively exploited in the wild.

Both rated as important, the flaws (CVE-2019-0803 and CVE-2019-0859) reside in the Win32k component of Windows operating system that could be exploited by attackers to run arbitrary code in kernel mode on a targeted computer.

Just last month Microsoft patched two similar vulnerabilities in the Win32k component that were also being exploited in targeted attacks by several threat actors including, FruityArmor and SandCat.

Besides this, Microsoft also released updates to patch 13 critical vulnerabilities, and as expected, all of the critical-rated vulnerabilities lead to remote code execution attacks, except one elevation of privileges in Windows Server Message Block (SMB) Server.

Adobe also rolled out security updates today to fix 40 security vulnerabilities in several of its products. Users of the affected Adobe software for Windows, macOS, Linux, and Chrome OS are advised to update their software packages to the latest versions.