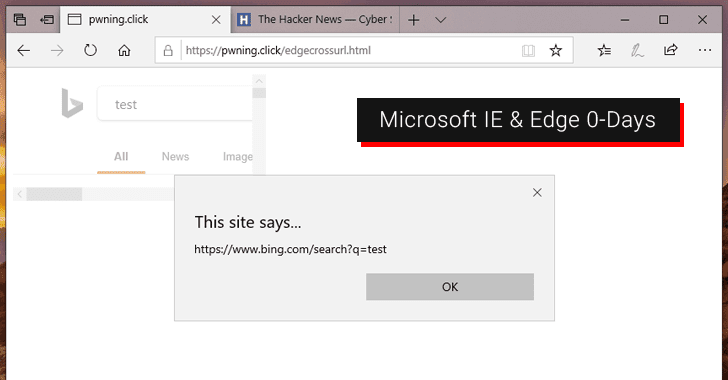 Same Origin Policy (SOP) is a security feature implemented in modern browsers that restricts a web-page or a script loaded from one origin to interact with a resource from another origin, preventing unrelated sites from interfering with each other.

In other words, if you visit a website on your web browser, it can only request data from the same origin [domain] the site was loaded from, preventing it from making any unauthorized request on your behalf in order to steal your data, from other sites.

However, the vulnerabilities discovered by 20-year-old security researcher James Lee, who shared the details with The Hacker News, could allow a malicious website to perform universal cross-site scripting (UXSS) attacks against any domain visited using the vulnerable Microsoft's web browsers.

To successfully exploit these vulnerabilities, all attackers need to do is convince a victim into opening the malicious website [created by hacker], eventually allowing them to steal victim's sensitive data, like login session and cookies, from other sites visited on the same browser.

"The issue is within Resource Timing Entries in Microsoft Browsers which inappropriately leak Cross-Origin URLs after redirection," Lee told The Hacker News in an email.


The researcher contacted Microsoft and responsibly shared his finding with the company ten months ago, that's almost a year, but the tech giant ignored the issues and did not respond to the disclosure till the date, leaving both the flaws unpatched.

Lee has now released proof-of-concept (PoCs) exploits for both issues.

The Hacker News has independently tested and confirmed both the zero-day vulnerabilities against the latest version of Internet Explorer and Edge running on a fully-patched Windows 10 operating system.

The newly-disclosed vulnerabilities are similar to the ones Microsoft patched last year in its Internet Explorer (CVE-2018-8351) and Edge browsers (CVE-2018-8545).

Since the details and PoC for both the zero-days have already been made publicly available, hackers won't take much time to exploit the flaws in an attempt to target Microsoft users.

What's disappointing is that there is currently not much that users can do to avoid this problem until Microsoft patches the security issues. You can use other web browsers that are not affected by this vulnerability, such as Chrome or Firefox.