The claim initially surfaced on the OnePlus support forum over the weekend from a customer who said that two of his credit cards used on the company's official website was suspected of fraudulent activities.


"The only place that both of those credit cards had been used in the last 6 months was on the Oneplus website," the customer wrote.

Many of the customers claimed that their credit cards had been compromised after they bought a new phone or some accessories directly from the OnePlus official website, indicating that the leak might have been through the company itself. 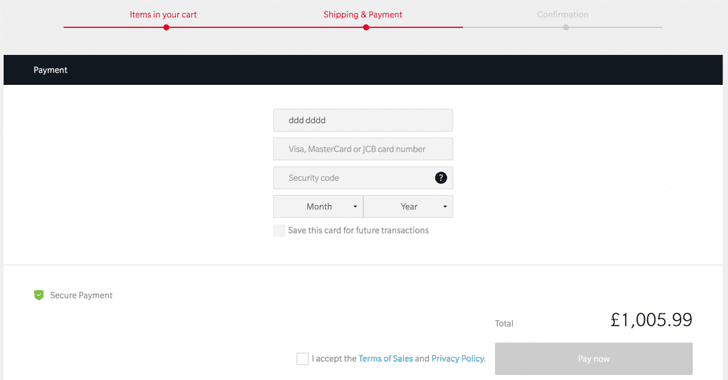 According to Fidus, OnePlus is currently conducting the transactions itself on-site, which means that all billing information along with all credit card details entered by its customers flow through the OnePlus official website and can be intercepted by attackers.


"Whilst the payment details are sent off to a third-party provider upon form submission, there is a window in which malicious code is able to siphon credit card details before the data is encrypted," Fidus wrote.

Fidus went on to clarify that their findings did not in any way confirm that the OnePlus website was breached; instead, they suggested the attacks might have come from the Magento eCommerce platform—which is used by OnePlus and is "a common platform in which credit card hacking takes place."

OnePlus has quickly responded to the issue on its forum, confirming that it does not store any credit card information on its website and all payment transactions are carried out through its PCI-DSS-compliant payment processing partner.

Only credit card-related information of users who have enabled the "save this card for future transactions" feature is stored on OnePlus' official servers, but even they are secured with a token mechanism.


"Our website is HTTPS encrypted, so it's very difficult to intercept traffic and inject malicious code, however we are conducting a complete audit," a company's staffer using the name 'Mingyu' wrote.

The Chinese smartphone maker also confirms that purchases involving third-party services like PayPal are not affected.

OnePlus does not reveal much information on the incident but confirms that its official website is not affected by any Magento vulnerability.

The company confirms that oneplus.net was indeed built on the Magento eCommerce, but said since 2014, it has entirely been re-built using custom code, adding that "credit card payments were never implemented in Magento's payment module at all."

There are almost 100 claims of fraudulent credit card transactions on the OnePlus support forums. OnePlus announces a formal investigation into the matter, and advises affected users to contact their bank to reverse the payment.