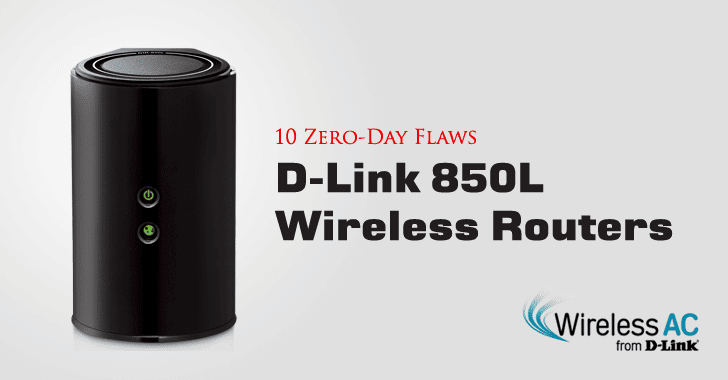 A security researcher has discovered not one or two but a total of ten critical zero-day vulnerabilities in routers from Taiwan-based networking equipment manufacturer D-Link which leave users open to cyber attacks.

If successfully exploited, these vulnerabilities could allow hackers to intercept connection, upload malicious firmware, and get root privileges, enabling them to remotely hijack and control affected routers, as well as network, leaving all connected devices vulnerable to cyber attacks as well.

The same happened in February, when the researcher reported nine security flaws in D-Link products but disclosed the vulnerabilities citing a "very badly coordinated" disclosure with D-Link.

So, Kim opted to publicly disclose the details of these zero-day flaws this time and published their details without giving the Taiwan-based networking equipment maker the chance to fix them.

Here's the list of 10 zero-day vulnerabilities affect both D-Link 850L revision A and revision B Kim discovered:


Kim advised users to cut the connections with the affected D-Link router in order to be safe from such attacks.

According to Kim, "the Dlink 850L is a router overall badly designed with a lot of vulnerabilities. Basically, everything was pwned, from the LAN to the WAN. Even the custom MyDlink cloud protocol was abused."

You can get full details of all 10 zero-day vulnerabilities on Kim's website as well as on security mailing lists.

The security of D-Link products has recently been questioned when the U.S. Federal Trade Commission, FTC sued the company earlier this year, alleging that the lax security left its products and therefore, "thousands of consumers" vulnerable to hackers.