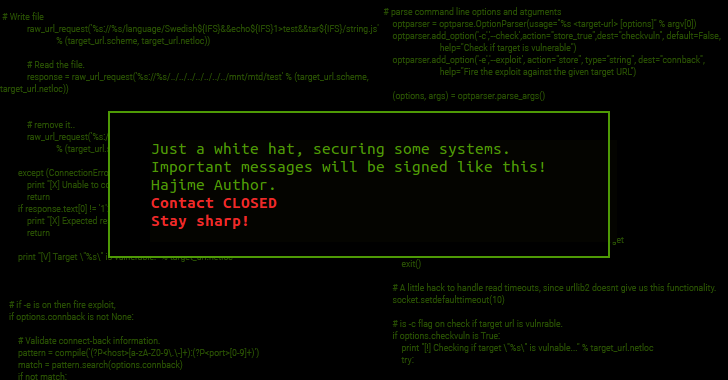 Last week, we reported about a so-called 'vigilante hacker' who hacked into at least 10,000 vulnerable 'Internet of Things' devices, such as home routers and Internet-connected cameras, using a botnet malware in order to supposedly secure them.

Now, that vigilante hacker has already trapped roughly 300,000 devices in an IoT botnet known as Hajime, according to a new report published Tuesday by Kaspersky Lab, and this number will rise with each day that passes by.

The IoT botnet malware was emerged in October 2016, around the same time when the infamous Mirai botnet threatened the Internet last year with record-setting distributed denial-of-service (DDoS) attacks against the popular DNS provider Dyn.


Hajime botnet works much like Mirai by spreading itself via unsecured IoT devices that have open Telnet ports and uses default passwords and also uses the same list of username and password combinations that Mirai is programmed to use.

However, the interesting part of Hajime botnet is that, unlike Mirai, once Hajime infects an IoT devices, it secures the devices by blocking access to four ports (23, 7547, 5555, and 5358) known to be the most widely used vectors for infecting IoT devices, making Mirai or other threats out of their bay.

Hajime also uses a decentralized peer-to-peer network (instead of command-and-control server) to issue updates to infected devices, making it more difficult for ISPs and Internet providers to take down the botnet.

One of the most interesting things about Hajime is the botnet also displays a cryptographically signed message every 10 minutes or so on infected device terminals, describing its creators as "just a white hat, securing some systems."

Unlike Mirai and other IoT botnets, Hajime lacks DDoS capabilities and other hacking skills except for the propagation code that lets one infected IoT device search for other vulnerable devices and infects them.


What's not known is: What the Hajime Botnet is for? or Who is behind it?

Also, the researchers believe that this might not happen, because Hajime botnet takes steps to hide its running processes and files on the file system, making the detection of infected systems more difficult.

So far, the purpose behind building this botnet is not entirely clear, but all signs yet point to a possible white-hat hacker, who is on his/her mission to secure open and vulnerable systems over the Internet.

However, the most concerning issue of all — Is there any guarantee that the Hajime author will not add attack capabilities to the worm to use the hijacked devices for malicious purposes?


Maybe today the Hajime author is in the mission to secure the world, but tomorrow, when he would realize he could make money online by renting his/her botnet to others, he could be another Adam Mudd.

Mudd, a 19-year-old teenager, has recently been sentenced to 2 years in prison for creating and running a DDoS-for-hire service called 'Titanium Stresser' that made more than 1.7 million victims of DDoS attacks since 2013.

Secondly, What if the well-intentioned botnet is hijacked by some malicious actor?


If this happens, the vigilant IoT botnet could be used for malicious purposes, such as conducting DDoS attacks against online sites and services, spreading malware, or instantly bricking the infected devices at one click.

Radware researchers also believe that the flexible and extensible nature of the Hajime botnet can be used for malicious purposes, like those mentioned above and conducting real-time mass surveillance from Internet-connected webcams, according to a new threat advisory published Wednesday by Radware.

Last but not the least: Do we seriously need some vigilante hackers to protect our devices and network?


This solution could be temporary, trust me. For example, the latest Hajime botnet is nothing but a band-aid.

Since Hajime has no persistence mechanism, as soon as the infected device is rebooted, it goes back to its previously unsecured state, with default passwords and the Telnet port open to the world.

How to Protect your IoT devices?


The only true solution is You — Instead of just sitting over there, doing nothing and waiting for some vigilante hackers to do miracles, you can protect your IoT devices in a way Hajime or any well-intentioned botnet can't do.

So go and update the firmware of your devices, change their default passwords, put them behind a firewall, and if any device is by default vulnerable and cannot be updated, throw it and buy a new one.

Just keep in mind: Once a single IoT of yours gets compromised, your whole network falls under risk of getting compromised and so all your devices which are connected to that network.