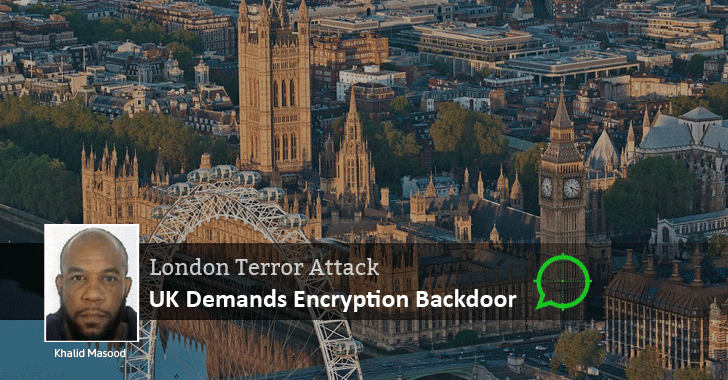 The government has once again started asking for backdoor in encrypted services, arguing that it can not give enough security to its citizens because the terrorists are using encrypted apps to communicate and plot an attack.

Following last week's terrorist attack in London, the UK government is accusing technology firms to give terrorists "a place to hide," saying Intelligence agencies must have access to encrypted messaging applications such as WhatsApp to prevent such attacks.

According to authorities, the killer, Khalid Masood, 52, was active on WhatsApp messaging app just two minutes before he attacked Britain's Houses of Parliament in Westminster that killed four people.


"We need to make sure that organizations like WhatsApp, and there are plenty of others like that, don't provide a secret place for terrorists to communicate with each other."

"It used to be that people would steam-open envelopes or just listen in on phones when they wanted to find out what people were doing, legally, through warranty. But on this situation we need to make sure that our intelligence services have the ability to get into situations like encrypted WhatsApp."

However, such encryption backdoor demand has once again fueled an ongoing debate over whether tech companies, like Facebook and Apple, should create backdoors into their encryption services for government.
According to Rudd, the government did not yet intend to force the companies with new legislation, but she confirmed that they have invited major tech companies, including Google and WhatsApp's owner, Facebook, on Thursday to set up an industry board to address this issue.

Rudd stressed her point, saying she is not arguing for the government to access all messages on encrypted platforms; instead wants tech companies to engage with law enforcement agencies in an effort to fight terrorism.

The incident has once again highlighted a clash between national security and digital privacy.

After the San Bernardino terrorist attack in December 2015, the US justice department made a similar move, demanding Apple to write code that could help them unlock iPhone belonging to one of the terrorists.

Even in Brazil, the government has blocked WhatsApp on various occasions, and froze $11.7 Million of Facebook funds, for allegedly failing to cooperate with the investigators.

Besides these countries, the French government also tried to put million dollars of fine on tech companies like Apple and Google each time they refused to help investigators extract data from a suspect's smartphone in terrorism cases.