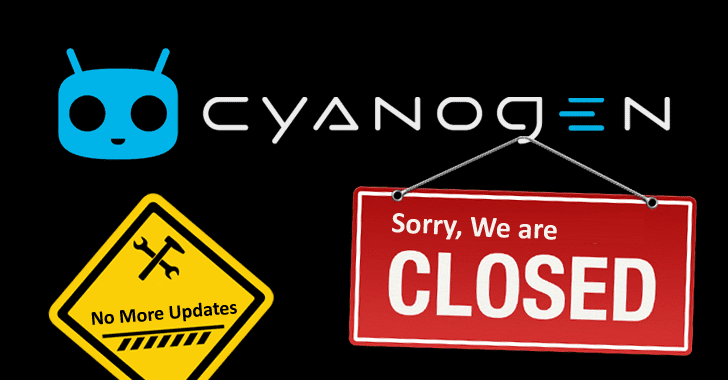 A bittersweet Christmas and New Year for users and fans of the most popular custom Android ROM, Cyanogen OS.

Cyanogen that tried and failed to kill Google's Android operating system is now shutting down the custom services that it provides to phones that run its Cyanogen OS as we know it and the "nightly builds" of said OS on December 31st.

Cyanogen came with an ambition to build better versions of the Android operating system than those created by Google itself, but following some technical and potential legal issues, the startup has decided to quit.

The planned shutdown of Cyanogen was officially announced late Friday through a very brief blog post made by the company, saying "as part of the ongoing consolidation of Cyanogen," it's shutting down all services and nightly builds on December 31.

"The open source project and source code will remain available for anyone who wants to build CyanogenMod personally," the blog reads.


What About Cyanogen OS-Powered Smartphones?


From January 2017, there will be no further updates to the Cyanogen OS, no more nightly builds, and no more security updates.

Eventually, smartphones running on the Cyanogen OS, like the original OnePlus One and Lenovo ZUK Z1, will have to switch to the open-source version of the CyanogenMod operating system.

CyanogenMod OS is not a commercial operating system and is managed by a community of developers led by Steve Kondik, the co-founder of Cyanogen.


However, the CyanogenMod team believes that the shutdown of Cyanogen is a "death blow" to CyanogenMod, the team announced just after the closure announcement by Cyanogen.

CyanogenMod team pays respects to the community as it served for more than eight long years and announced the next open-source Android project.

Embracing the spirit of Cyanogen, the CyanogenMod team of developers, designers, device maintainers, and translators are now working to produce a fork of the CyanogenMod source code and pending patches.


While both Cyanogen and CyanogenMod are saying goodbye this year, the spirit of CyanogenMod will continue to live on in the new open source project.

Dubbed LineageOS, the new OS is still in its inception phase and would take some time for people to see any progress from the newly formed unit.

According to the CyanogenMod (CM) team, Lineage "is more than just a 'rebrand'" and "will return to the grassroots community effort that used to define CM while maintaining the professional quality and reliability you have come to expect more recently."

A website is being developed for LineageOS, and the GitHub repository can be found populated with CM files, called Lineage Android Distribution. The beginning of this new open source project "will be a continuation of what CyanogenMod was."