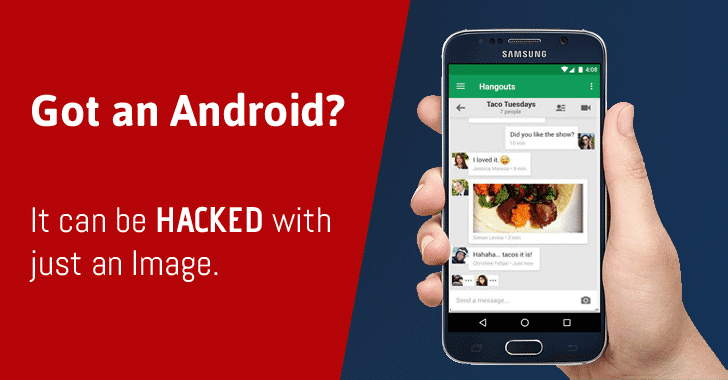 Own an Android smartphone? Beware, as just an innocuous-looking image on social media or messaging app could compromise your smartphone.

Along with the dangerous Quadrooter vulnerabilities that affected 900 Million devices and other previously disclosed issues, Google has patched a previously-unknown critical bug that could let attackers deliver their hack hidden inside an innocent looking image via social media or chat apps.

In fact, there is no need for a victim to click on the malicious photo because as soon as the image's data was parsed by the phone, it would quietly allow a remote attacker to take control over the device or simply crash it.

The vulnerability is similar to last year's Stagefright bug (exploit code) that allowed hackers to hijack Android devices with just a simple text message without the owners being aware of it.

However, the recent vulnerability (CVE-2016-3862) resided in the way images used by certain Android applications parsed the Exif data in an image, SentinelOne's Tim Strazzere, the researcher who uncovered the vulnerability, told Forbes.

An Image Received...? Your Game is Over


Making a victim open the image file within an affected app like Gchat or Gmail, a hacker could either cause a victim's phone to crash or remotely execute malicious code to inject malware on the phone and take control of it without victim's knowledge.


"Since the bug is triggered without much user interaction – an application only needs to load an image a specific way – triggering the bug is as simple as receiving a message or email from someone," Strazzere said. "Once that application attempts to parse the image (which was done automatically), the crash is triggered."

According to Strazzere, attackers could develop a simple exploit inside an image to target a large number of vulnerable Android devices.

Strazzere crafted exploits for the affected devices and found that it worked on Gchat, Gmail and most other messenger and social media apps, though he did not disclose the names of the other non-Google apps affected by the flaw.


All versions of Google's operating system from Android 4.4.4 to 6.0.1 are vulnerable to the image-based hack, except today's update that fixed the vulnerability.

The researcher even successfully tested his exploits on a handful of phones running Android 4.2 and Amazon devices and found that the devices remain unpatched, leaving a large number of users of older Android devices exposed.

So, if you are not running an updated version of operating system and/or device, you probably are vulnerable to the image-based attack.

Google has delivered a patch to fix the issue, but given the shaky history of handset manufacturers and carriers rolling out security patches, it is not known how long the companies will take to update vulnerable Android devices.

Google rewarded Strazzere with $4,000 as part of the company's Android bug bounty program and another $4,000 as, Forbes reports; Strazzere had pledged to give all his reward money to Girls Garage, a program and workspace for girls aged 9-13.