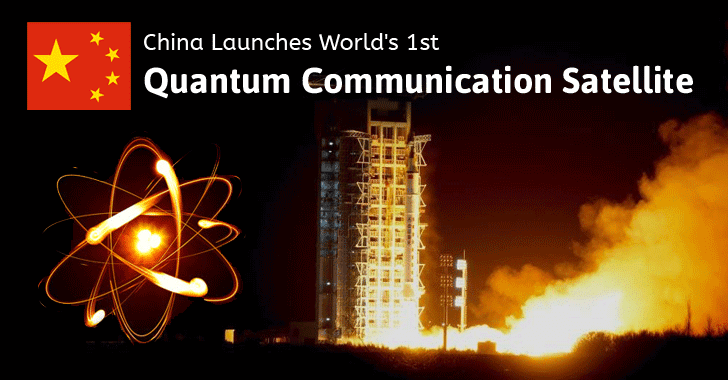 China has launched the world's first quantum communications satellite into orbit aboard a Long March-2D rocket earlier today in order to test the fundamental laws of quantum mechanics at space.


The satellite, dubbed Quantum Science Satellite, is designed to develop a 'Hack-Proof' communications system in this age of global electronic surveillance and cyber attacks by transmitting uncrackable encryption keys from space to the ground.

The 600-plus-kilogram Quantum Science Satellite, better known as Quantum Experiments at Space Scale (QUESS) satellite, took off from the Jiuquan Satellite Launch Center in Gobi Desert at 1:40 AM local time on a 2-year mission on Tuesday.

The QUESS satellite will help China perform unprecedented levels of experiments in quantum communication by sending entangled photons from the satellite to relay stations in China and Europe, which is separated by about 1,200 kilometers (746 miles).

The pioneering experiment is to test if the spooky property of quantum entanglement can work at long distances as well.

The satellite's payloads include:
The payloads, designed to operate for two years, were developed by the National Space Science Center in Beijing under the Chinese Academy of Sciences.

The QUESS satellite will also test the possibilities of communication via quantum 'teleportation,' using an entangled pair of photons.

If the satellite is able to successfully transmit quantum information securely between two ground stations, it could have huge implications for encryption and cryptography.


Quantum communication encryption is secure against any kind of interception because information is encoded in a quantum particle in such a way that it will be destroyed as soon as the system detects any intrusion attempts.

For example, when two people share an encrypted quantum message and a third person intercepts it, the message will change in an unpredictable way.

Quantum researchers have recently experimented the use of photons to successfully communicate securely over short distances on earth.

But if successful, the QUESS satellite would vastly expand the range of unhackable communication to long distances as well.


"The newly-launched satellite marks a transition in China's role - from a follower in classic information technology development to one of the leaders guiding future achievements," Pan Jianwei, the scientist who is leading the project, told the official Xinhua news agency.

If successful, the QUESS satellite would be the world's first transcontinental quantum key distribution network of its kind and China hopes to erect a global quantum communications network in 2030.