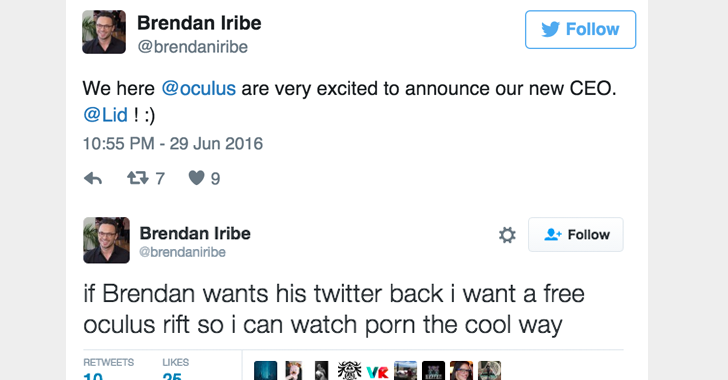 This time, it is Facebook-owned virtual reality company Oculus CEO Brendan Iribe who had his Twitter account hacked Wednesday.

Iribe is the latest in the list of technology chief executives to have had their social media accounts hacked in recent weeks.

The hacker, who has not been identified yet, changed Iribe's cover photo and replaced his bio to "im not testing ya security im just having a laugh."


"Imagine creating the coolest s*** to ever be introduced to gaming and technology but using the same pass for 4 years lol... silly mr CEO!"

All the tweets in question have since been removed from Iribe's Twitter feed, and the account has now been restored.

The hacker later told Tech Crunch that he was able to get the hold on Iribe's Twitter account by using his credentials exposed in recent MySpace data breach.

LinkedIn and MySpace Database Uploaded to Torrent for Download


Independent British researcher Thomas White has now made over 360 million passwords from 2013 MySpace data breach available on his website.

Not only this, but White is also offering download links for over 167 Million credentials from 2012 LinkedIn data breach.

Social network for professional LinkedIn was hacked in 2012, but a hacker named Peace made the dataset of over 167 Million emails and passwords, including 117 Million already cracked passwords, available for sale on the underground market.

Myspace, a once-popular social media website, was also hacked in 2013, but the same hacker made the database of more than 360 million users available for sale in an online hacker forum.

Until now, these hundreds of millions of hacked credentials were available only to limited audience, but with this release, anyone can download torrent links offered by White and misuse the credentials to hack more online accounts.

However, White provide this following explanation to justify his move:


"Of course, there is a risk," White told Jeremy Kirk. "People will as a result probably get a few accounts compromised. But once that happens, they will probably reset their passwords now and learn the lesson, rather than learn it in 12 months when they have five more accounts with the same password."


It is high time you changed your passwords for all social media sites as well as other online sites if you are using the same password.