Researcher spots an ATM Skimmer while on vacation in Vienna 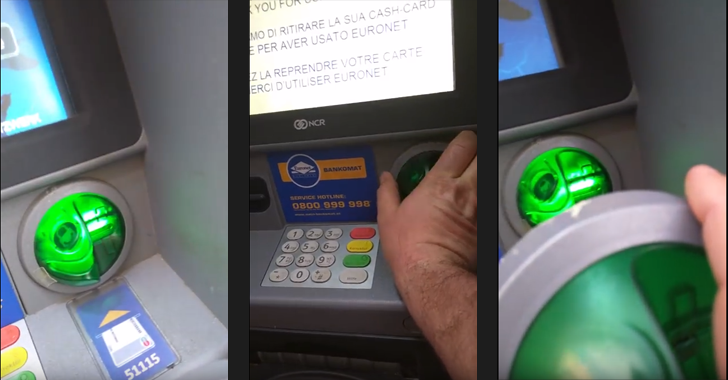 We have heard a lot about ATM skimmers, but it's nearly impossible to spot one.

Some skimmers are designed to look exactly like the card slot on the original machine and attached to the front, and others are completely hidden inside the ATM.

But, during his vacation in Vienna, Austria, cyber security expert Benjamin Tedesco spotted an ATM skimmer that was totally unrecognizable.

Tedesco was hanging out in Vienna and when about to draw some cash from a cash machine outside St. Stephen's Cathedral, he decided to do a quick visual inspection of the ATM machine and surprisingly spotted the dodgy device attached to it.

That was a credit card skimmer – a perfect replica of the actual card reader that was designed to steal credit card information of users when they swipe their card to take off cash from the ATM.

"Being security paranoid, I repeated my typical habit of checking the card reader with my hand as I have 100's of times," Tedesco wrote in a blog post. "Today's the day when my security awareness paid off!"

Tedesco, an employee of Carbon Black firm, immediately grabbed hold on the Skimmer glued on the top of the actual card reader and dragged it out.
The ATM skimmer detected by Tedesco contained a magnetic strip reader, battery, some sort of switch and a control board with the four pin connector.

Watch the video he recorded to share with the all of us just to make us aware as well as believe that sometimes being vigilant and a bit paranoid can save our cash.